Mountain goat numbers are thought to be relatively stable in the Snow Peak area, with populations ranging from Snow Peak to Foehle Creek along the Little North Fork of the Clearwater River, north to the Sisters Creek drainages and west to Fishhook Creek, south of Avery. The population, which runs south of the St. Joe River to the Clearwater region, is scattered and has not been recently tallied.
RALPH BARTHOLDT/Press

Hunters can apply for permits until the end of April

A North Idaho mountain goat survey found almost twice as many goats in the Selkirks than a previous survey.

This year’s aerial survey found 57 goats in Unit 1, up from 34 goats the last time mountain goats were counted there, Fish and Game said.

Biologists counted 11 goats in a pocket of the Cabinet Mountains, where mountain goats move back and forth between Idaho and Montana. Population estimates there have ranged from 50 to 80 animals between both states. Biologists who surveyed the Idaho side of the range in 2001 counted 16 goats there.

The latest survey is a spinoff from a public opinion poll that asked for an updated mountain goat survey in Unit 1. Fish and Game biologists surveyed a 15-mile stretch of the Selkirk Crest between Canada and Harrison Peak and estimated the ratio of kids — juvenile goats — to adults to be 13 juveniles for every 100 adults. Based on the numbers, the recruitment rate is a little lower than what IDFG considers optimal, according to the report.

The state’s latest goat management plan, written by IDFG biologists, recommends a hunting season when at least 100 goats make up a population, with a ratio of 15 juveniles to 100 adults, according to IDFG.

The more stringent numbers were adopted since 2016 when goat management in the Panhandle regarded populations of 50 mountain goats feasible to support mountain goat hunting, although “harvest shall not exceed 5 percent of the adult segment of the population, except during periods of high recruitment,” according to a statewide mountain goat report.

Idaho hunters have until the end of this month to apply for moose, bighorn sheep and mountain goat permits.

The history of goat populations in the Selkirks shows three goats were counted there in 1981, followed by translocation of 28 goats to the region from Snow Peak at the edge of the St. Joe and Clearwater river drainages.

Mountain goat numbers have remained relatively stable in an area generally referred to as Snow Peak, which encompasses the Upper Clearwater and Panhandle’s southern St. Joe River region, with populations ranging from Foehle Creek along the Little North Fork of the Clearwater Raiver, north to the Sisters Creek drainages and west to Fishhook Creek south of Avery.

The population there is scattered and has not been recently tallied, although a survey was attempted in July 2015 in which nine goats were observed in the Sisters Peaks areas.

“Observers were sent out in pairs to observe likely goat habitat,” in Unit 7, but “fog and rain made glassing difficult and summer may be too warm of a season to effectively spot mountain goats during the day,” according to the IDFG report.

Besides Panhandle and Clearwater groups, Gem State mountain goat populations are fragmented and exist throughout central Idaho, and in Hells Canyon and the Snake River Range. 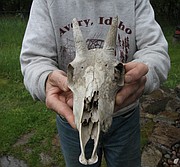