Special session gets off to a rocky start Monday

Ammon Bundy, center, who led the Malheur National Wildlife Refuge occupation, stands on the Idaho Statehouse steps in Boise, Idaho, on Monday, Aug. 24, 2020. He's among those attending a special session of the Idaho Legislature called due to the coronavirus pandemic. (AP Photo/Keith Ridler)

The special session of the Idaho Legislature got off to a rocky start Monday after protesters forced their way into the state capitol in Boise.

The protesters, including activist Ammon Bundy, held signs that condemned civil immunity legislation, decried the government as tyrannical and urged Americans to “Drain the swamp.”

The upper gallery on the fourth floor had been cordoned off for legislators wishing to practice social distancing, but the protesters marched past Idaho State Police troopers and through the upstairs hallways, trying to push through security guards to force their way into the gallery and House chambers.

“A surreal scene,” Coeur d’Alene Rep. Paul Amador told The Press as he described the day’s events. “I’ve never seen anything quite like this.”

In videos from Boise, an ISP trooper was seen being squeezed against the wall as the mob chanted, “Let us in.”

The glass door that leads to the gallery shattered in the scuffle.

“I haven’t heard of any injuries,” said Amador, a Republican, “but some of the protesters are very vocal and aggressive.”

Several protesters also made their way into conference rooms where lawmakers were conducting meetings. After a silent standoff, one protester declared, “You work for us,” which spawned joyous applause from the crowd.

Protesters were later allowed in by House Speaker Scott Bedke, who gave stern instructions to the unexpected guests.

The special session was not closed to the public, but capacity was limited in an effort to practice social distancing. It was enough of a concern among lawmakers that required negotiation before Gov. Brad Little could announce the special session, but almost all the protesters who stormed the Capitol — and many of the lawmakers in both the House and Senate — were not wearing masks, creating a source of contention among legislators.

“This session has been pretty terrifying, frankly,” assistant Minority Speaker Ilana Rubel of Boise said in a phone interview Monday evening. “I thought we had a deal struck to adhere to some health protocols, as some of our health-needy legislators needed social distancing. But there hasn’t been any compliance. We’re seeing committee rooms packed with hundreds of people, all with no masks.”

Rubel added that many legislators — herself included — have compromised health, and that some are considering walking out of the session. For one lawmaker, consideration disintegrated into decision.

“Unfortunately, I had to excuse myself from Committee,” Rep. Melissa Wintrow, D-Boise, said in a Monday tweet, “due to lack of social distancing and the large crowd that filled the Lincoln Auditorium. The crowd was hostile to me but I tried to remind them of the need for civility. Didn’t matter. This is what we have come to.”

Little called the special session and offered three pieces of legislation for consideration: two bills dealing with elections and one that would essentially indemnify businesses, governments and schools from COVID-19-related lawsuits when making good-faith efforts to protect employees, customers, citizens and students. Those were not the only bills to get introduced.

Sen. Mary Souza of Coeur d’Alene proposed an amendment to election laws to require additional security measures for absentee ballots. That was part of SB 1001, which provides election offices with the ability to process absentee ballots early, as county clerks are expecting a heavy influx of absentee ballots this year. The amended legislation eventually passed the Senate unanimously.

The Senate also passed legislation allowing voting centers in this November’s general election. The stations will be set up throughout the state and will not require voters to go to specific precincts. The bill goes to the House today.

The House, meanwhile, listened to testimony Monday about a few versions of civil liability legislation in the House Judiciary Committee. More testimony is scheduled today.

One noteworthy piece of legislation came from Meridian Rep. Steven Harris, who introduced a resolution to end Little’s emergency declaration over COVID-19, claiming that the state is no longer in immediate danger because the state’s health care capacity has stabilized. The resolution, if passed, would effectively end Little’s Idaho Rebounds plan that requires businesses to follow health protocols, including social distancing.

The bill made it through House State Affairs on an 11-4 vote, but because the issue wasn’t previously agreed upon in the negotiations between Little and the Legislature’s leadership, the legislation is unlikely to go any further. 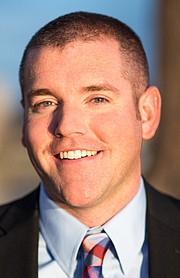