A three-season bear study that began last year will determine if game cameras can be used to pinpoint bear density in Idaho, as well as track bear movements. IDFG photo

When Matt Nelson completes his black bear study next year he hopes to have collared 36 bears from south central Idaho to the Panhandle’s St. Joe River Valley in an effort to learn where the state’s version of ursus americanus likes to hang out, and whether game cameras can be used to make solid population estimates.

The cubbies are made of logs, with one entrance. When a bear visits and steps on a spring-loaded trap, a cable snares its leg.

Alerted to the catch, biologists hurry in for a visit to dart and subdue the bear, give it an ear tag and cinch a GPS collar on its neck before releasing it.

The bears are usually docile when the researchers swoop in.

“They will put their paws over their eyes like, ‘You can’t see me, because I can’t see you,’ sort of thing,” Nelson said.

Game cameras are readily used by sportsmen and women to learn how the animals they plan to hunt move, how big they are and when the best time is to ambush them. Idaho Fish and Game considered using the cameras a few years ago as the department sought better ways to pinpoint population densities. Flying in helicopters to visually observe and count animals was becoming unfeasible. It was costly and could be dangerous.

Over the years several biologists in the West died doing research when their aircraft crashed in inclement weather. And even from the air, animals could be hard to see, especially in Idaho’s thick cover.

“There are a lot of factors that make harvest numbers vary from year to year,” Nelson said.

The variables, such as weather that keeps hunters inside, or a change in food sources that has hunters looking for bears after they have moved somewhere else, have little to do with how populous a species is across its range.

“The variables can’t be replicated because you can’t keep all them the same,” he said.

That is why the six researchers in Nelson’s study that includes Unit 6 along the St. Joe River, Unit 10A east of Orofino, and Unit 32A southwest of McCall, will spend much of the next two summers in the woods trapping and collaring bears, and monitoring game cameras.

“The focus is to determine if remote cameras can be used to estimate bear density and cub recruitment and how strongly berry abundance and diversity affects cub recruitment,” Fish and Game biologist Barb Moore said.

Her department will tap into the study to see how cub recruitment is tied to berry crops. Berries including huckleberries are among a black bear’s favorite — and weight producing — foods.

Moore was among IDFG biologists who worked on a Panhandle bear study a decade ago that used hair sample collection sites to determine bear movement across North Idaho, especially during years of berry crop failures.

North Idaho bear populations appear to have been relatively steady over the past several decades with fluctuations tied to berry crop abundance.

Nelson’s study will also monitor what affect human habitation and activity have on bears and bear movement.

Nelson said the game cameras in his study will be placed randomly. A computer uses a grid pattern and GPS coordinates to decide where they go.

Density will be estimated based on two premises: The farther apart in a grid that bears are found corresponds to fewer bears in the unit, whereas bears found closer together means there are more bears.

The collars are programmed to fall off the bears in 2021, Nelson said, when the research project comes to a close. 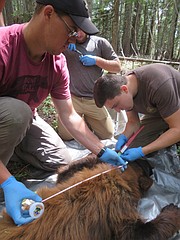