UI, IDFG team up to investigate hunters’ and anglers’ needs

Kenny Wallen joined the University of Idaho’s Department of Natural Resources and Society in 2019 in a unique position shared evenly by the university and Idaho Department of Fish and Game. Wallen, who works on projects statewide, gathers data from hunters, anglers and recreationalists about Idaho’s wildlife management.
(Photo by MELISSA HARTLEY, University Communications and Marketing)

Kenny Wallen uses sociology and behavioral sciences to understand how Idahoans want to use the state’s natural resources.
(Photo via Pixabay)

(Photo via Pixabay) Kenny Wallen is working with Idaho Department of Fish and Game to improve white-tailed deer management in Idaho.

Running into friends during happy hour or at a barbecue can lead to memorable laughs and great stories. Running into folks in the woods while bow hunting for deer may not be as welcome.

The Idaho Department of Fish and Game has fielded concerns about crowded forests and uplands from hunters for years. But a partnership between Fish and Game and the University of Idaho, led by scientist Kenny Wallen will help them tackle the problem.

Wallen last year joined the UI’s Department of Natural Resources and Society in a position shared evenly by the university and Fish and Game. The agency asked Wallen to collect information from Idaho’s hunters, anglers and recreationists about wildlife management in the state.

Depending on the issue he’s addressing, Wallen may ask anything from the type of animals hunted to people’s opinions on what makes the best hunting grounds. Together, he and the game department integrate that information into wildlife management plans.

“I have a direct line to decision-making processes at Fish and Game, so I can see my science translate to actual management,” Wallen said.

State agencies and universities often work together to address local research questions, but a joint position such as Wallen’s is one of the first of its kind nationally. Despite similar cooperative positions between universities and federal agencies, various institutional barriers and the lack of a blueprint for how a permanent state agency-university position operates have limited such partnerships.

According to Jon Rachael, a state wildlife manager who works with Wallen, the agency traditionally gathered people’s opinions through open houses and public meetings and, in recent years, through the department website. The agency conducts public surveys on larger issues, but it’s often hard for the wildlife managers to know whether the opinions expressed are representative of the general public or a group with special interests.

Kenny Wallen uses sociology and behavioral sciences to understand how Idahoans want to use the state’s natural resources.

“Our agency serves the public by managing wildlife and fisheries, and most of our managers have specialized in fish or wildlife management. Soliciting and interpreting public opinions isn’t necessarily our expertise,” Rachael said. “We’re really excited to have a human dimensions specialist on board to help us get the information from the public we really need to make fish and wildlife management decisions.”

Wallen said one of the challenges of “people management” is convincing the public of the need for such measures. He thinks successful management relies on understanding and predicting human reactions to natural resource availability.

“You’re not just convincing, let’s say, hunters. You’re convincing different stakeholder groups including legislators, agencies, civic groups and local communities,” Wallen said. “You have to understand what motivates each group and how best to collect data and frame findings for who you want to talk about or are talking to.”

For example, deer hunters differ on whether they pursue mule deer or whitetails, whether they hunt with a bow or rifle, hunt game for meat or a trophy and where they hunt. The Clearwater and Panhandle are the prime whitetail hunting regions in Idaho. Stakeholders in these regions have different motivations and are worried about different issues than the rest of the state. Capturing the differences and similarities among stakeholders is essential for management, Wallen said.

Although he is based in Moscow, Wallen works on Fish and Game projects across the state. His largest project with the department includes investigating hunting conditions for white-tailed deer, mule deer and elk, which bring in more revenue and hunters than other game species in Idaho. Fish and Game wants to know if hunters are too clustered on the landscape, not only in terms of deer and elk conservation, but also to the point of feeling crowded.

If hunters think the presence of too many other hunters is lowering their success, they won’t be satisfied with the hunt, Wallen said.

“My job is to help (Fish and Game) figure out what information they need and don’t need in terms of tracking and managing humans on the landscape,” he said.

To address crowding during hunting season, Wallen will improve data on Idaho hunting.

In time, Wallen will work with Idaho, Montana and Wyoming managers on a plan for pronghorn, which migrate between the three states. The team will investigate the causes of conflicts between hunters for preferred hunting grounds across the three states. Wallen will also tackle management plans for steelhead and salmon by helping to design a citizen advisory group to evaluate management plans to alleviate conflicts between anglers in the Clearwater River drainage.

“I don’t just want to write papers,” Wallen said. “I want to see my work be used, and, in this position, I’ll really get a chance to make a difference in Idaho.”

(Photo via Pixabay) Kenny Wallen is working with Idaho Department of Fish and Game to improve white-tailed deer management in Idaho.

Kenny Wallen uses sociology and behavioral sciences to understand how Idahoans want to use the state’s natural resources. 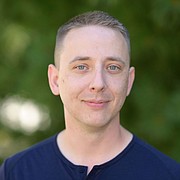