FBCS graduates drive into their futures

Joshua Droppa, selected as the student speaker for the Forrest M. Bird Charter School graduation, caps his speech with a little music on his kazoo — much to the delight of his fellow graduates.
(Photo by CAROLINE LOBSINGER)

And as the call out to Forrrest M. Bird Charter Schools’ newly minted graduates went out over a live feed of the school’s race-themed commencement ceremony, cheers and motors revving could be heard from along the roads lining the school where students had parked in their cars with their families.

With the challenges posed by everything from COVID-19 to rainy weather, FBCS principal Jennifer Greve told graduates trying to figure out what to say seemed an insurmountable task at first. She noted the differences — among them, the students taking part in the graduation from their cars instead of the commencement’s traditional spot of the Panida Theater. “What could possibly any of us say that could move you as you walk into the world of adulthood?” she said.

But as she thought she said she realized it was about each of them, each individual set to make the world work for them and not the other way around.

“You all want to be yourselves and will not make apologies to anyone for it,” Greve said. “It was then that I realized it’s not really about what we have taught you or wise words to bestow upon you as a last lesson. I realize it is really more about what you all have taught us, you as a group and as individuals.”

This year’s graduates taught her to meet adversity with honest compassion, a positive outlook and a problem-solving attitude; to meet challenges with the intention to help others. “But most often, you each met challenges and adversity with just a slight shrug of the shoulder and a smile that said, ‘Don’t worry. We’re going to figure it out,’ ” Greve said.

The Class of 2020’s heart can be seen in graduates’ selection of custodian Ray Smith as their featured speaker. While Smith politely declined to speak, he attended the ceremony in a spot of honor aboard his “chosen throne” of the school’s lawnmower to celebrate the graduates.

“Second-place” speaker, teacher Mark Webber, paid homage to Smith, noting his 38 years as a hard-working maintainance man, the last 19 at the charter school. “I cannot think of a better person to choose because it’s not the job that makes the person essential it is the person who makes the job essential,” Webber said. “And the one thing about Ray is that Ray is a man that is essential to all of us and our community.”

Not only does Smith care about the students, faculty and the schools, he is kind to all, arrives early in the winter to clear sidewalks and has been known to turn up at the school on Halloween to ensure people know someone is there to prevent potential vandalism.

“Ray is essential,” Webber said to cheers, applause and honking horns. “Not only is Ray essential in all those things, I’d also like to say Ray is essential to me as a friend and a person I look to and admire and wish I could even meet some of the things he has done in his life.”

But Smith isn’t the only essential person at the school, Webber said. The students themselves are essential, he told them. As they watched the second trimester move online and the third melt away, FBCS students listened to the debate on who is essential or not, and which business should be open or not.

“I don’t know if you guys know this or not but you, too, are essential, Webber told them. “You’re not only essential to us as a faculty but you are essential to your community, your family, and you’re also essential to the future of our nation. I know some of you don’t believe me in that because you guys have been goofy and kind of a little wild at times, but truly you are and that’s no conspiracy theory. And if you know me, you’ll know why I said that.”

Webber told the graduates that they bring joy, happiness and compassion to the world but also a sense of diplomacy that creates peace in moments of trial.

Webber than lauded several of the Class of 2020’s members, although he noted he could go on all day and tell many more stories than time allowed.

Essential are the students in the culinary arts class who tempted him to find an excuse to leave his classroom just so he can walk by to see, laughter and dancing and hear “the ’80s music that only Casey Kasem could pick out.”

Essential are the creators of Flamin’ Gary’s Hot Sauce who “made so much comedy out of the craft fair in [their] invention, it was such a joy because you can take a stressful situation and detox it with your humor.”

Essential is his mechanic friend with a natural curiosity about the law. “You probably don’t know this but you are a genius and I stand in awe of you every time I read your answers for your reports or whatever you submit in,” Webber said. “You really have a wonderful mind. I hope that either you are extremely humble or you need to take lessons in realizing how great you are but you are essential and you basically took me to new heights of thinking.”

Essential is that student’s polar opposite, boisterous and hard to quiet down. “However, sometimes when you speak your mind, you are saying what I am thinking but let’s face it, not all the time.”

Essential are the trio who set him on fire one year as they worked on his 1976 Ford 150 pickup. “I just want you to know my eyebrows have grown back, they never looked better and the gray in my beard may be because of that incident.”

Essential is the senior who kept the school’s online newspaper going during the shutdown and switch to online learning, the aspiring YouTube star who has taughthim so much, and a group whose CD is on his wall.

“The one thing that you all have in common is your desire to help others, to always reach your creative potential in some way,” Webber told the graduates. “Keep on challenging yourselves because if you can keep challenging yourselves, everything you do gets better the next time so you’re always improving which is amazing.”

After thanking the parents, guardians and friends of the graduates for their essential role in supporting the students and helping make them the young men and women of the future, Webber introduced the student speaker of choice, Joshua Droppa — also the inventor of Flaming Gary’s Hot Sauce — to sustained honking and cheers.

Putting his cap on the podium, Droppa smiled and turned to his fellow graduates. “S’up?”

Droppa said he couldn’t speak for every graduate but could speak about what FBCS mean to him. He’d had trouble learning math and English in the past, but the charter school’s teachers and staff made the difference. From being there to talk to when he needed advice or help to the freedom to explore subjects that interested him, Droppa said the school has proven to be a wonderful school. “I’ve been able to learn about things that I plan to use in my future career and education,” he said. “And honestly I’ve had fun working on school projects which is something that I would never have that I would have, to be honest.”

From teachers’ advice to support from everyone at the school, Droppa said the school made the difference for him. “[What] this school has provided for me is the wonderful teachers and staff,” he added. “It’s really great being on similar level to teachers, to be able to talk about the subject that you’re struggling with or just talk to them in general.”

After mentioning several teachers for their specific roles in his education, Droppa reached in to his pocket, pulling out a kazoo, and turned toward his fellow graduates.

As the notes from his short performance died away, honking horns and applause took their place, only ending when Greve returned to the podium.

“I love that [Droppa] ended with a kazoo,” she said. “Because remember what I said, they make the world work for them. Well, they’re not fitting into our world. You guys are fitting into your own. And I love it.” 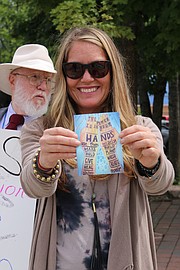 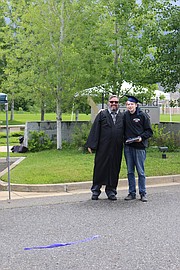 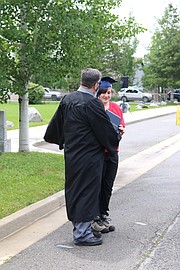 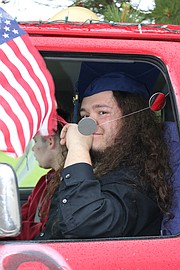 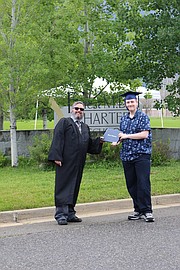 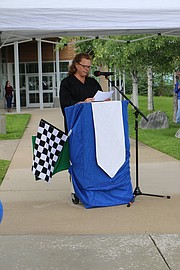 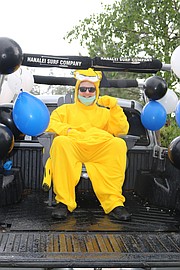