The only member of the North Idaho Pike Association to fly fish during tournaments, Phil Biggerstaff caught a 20.2 pound pike on a streamer Sunday on Lake Pend Oreille. Catching a 20-plus pound pike on a fly rod has been Biggerstaff’s obsession for many years, the Coeur d’Alene resident said.
Courtesy photo

Biggerstaff ties his own pike flies including many that are more than 10-inches long. Pike often follow the gaudy flies as they are stripped through the water, and the pike don't grab the flies until they are near the boat, making for an exciting experience, Biggerstaff said. Courtesy photo

Biggerstaff, an avid fly fisherman who grew up hooking trout and spiny rays from the Noxon Reservoir to Lake Pend Oreille via the Clark Fork River, decided a half dozen years ago to chase pike on a fly rod.

He didn’t just want any pike though. Biggerstaff wanted to hook and fight — and not lose — the kind of big, bad, toothy, missile-like predator that would test his skills.

He figured a 20-pound pike, known as slough sharks and jackfish, was a good place to start.

In his quest for a pike as rotund as a weight lifter’s leg Biggerstaff learned to tie pike flies, gnarly streamers with multiple hooks that combined the gaudiness of a Mardi Gras pole dancer with the feckless terminality of a switchblade.

He knotted the weighty swimming lures to the end of 80-pound test tippet, because steel leaders dangled from a fly get-up seemed dishonest for an aesthetic fly angler. He cinched his knots with a pliers, and launched the streamer contraptions with eight or 10-weight fly rods into the brackish sloughs and backwaters of North Idaho and northwestern Montana.

His success came in spurts as pike measuring 2 and 3 feet long or larger stripped line from his reel, bent his fly rods like witching sticks and were brought to the net on the reel.

He caught bigger ones too. But it wasn’t until last week on Lake Pend Oreille that Biggerstaff hooked the one fantasy fish that had driven him for a half decade to hone his pike-slaying prowess.

“I saw it come up,” Biggerstaff staff said. “It was like a shadow. I knew there was something down there.”

Next to the boat in about 3 feet of water the 20-pound fish slammed a streamer that Biggerstaff concocted using colored strands of a mop he had wrapped to a series of hooks and given a set of weighted eyes.

The pike, when he got it to hand, weighed a smidge over 20 pounds.

“I’m stupid excited about it,” said Biggerstaff, who manages the restoration of classic boats for a local boat company.

The pike is still out there for another Lake Pend Oreille angler to have a shot.

A while after he started chasing pike, Biggerstaff joined the North Idaho Pike Association. He is still the only member at the organization’s annual tournaments who throws flies.

“I get a lot of interesting looks,” Biggerstaff said. “Especially when I do the big Lester Smith spring pike derby put on by Fins & Feathers. You get over a hundred teams of two in that one.”

Because the tournaments are doubles, Biggerstaff, who grew up in Sandpoint, fishes with longtime pike angling partner Jeremy Vasquez, who accepts Biggerstaff’s fly fishing angle, in part because Biggerstaff catches fish.

If he doesn’t, he promises to switch to gear, at least for the rest of the tournament.

“That has not happened yet,” Biggerstaff said. “I usually catch the first fish.”

When a pike chases a streamer, Biggerstaff learned, it often — like his 20-pounder — follows the lure to the boat.

Allowing the streamer to slosh around in the water before pulling it in will often entice a following pike to grab the lure.

“I usually give it a quick back and forth before I take it out of the water,” Biggerstaff said. “When I bring (the streamer) to the boat I look a foot or two feet behind it …” for a trailing pike.

He likes the spookiness that comes with pike fishing, the last-minute grab by a big, toothy predator.

“They are creepy critters, they really are,” he said.

The 20-pounder tapped the mop-head streamer a few times very lightly as Biggerstaff stripped it in, but didn’t grab it until the last second.

“I like trout fishing,” he said, “But, pike fishing, everything about it, from stripping the line to watching the fly …”

And the size of the trophies. 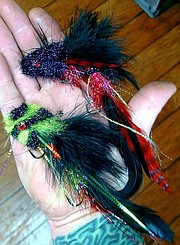 Biggerstaff ties his own pike flies including many that are more than 10-inches long. Pike often follow the gaudy flies as they are stripped through the water, and the pike don't grab the flies until they are near the boat, making for an exciting experience, Biggerstaff said. Courtesy photo