Bulldog baseball believes a trip to state is within their grasp

(Photo courtesy of JASON DUCHOW PHOTOGRAPHY) Avery Bocksch fields a grounder versus Moscow on May 6.

(File Photo by ERIC PLUMMER) Senior Tyler Lehman, Sandpoint's No. 1 pitcher, has hopes this season and wants a district title more than anything.

Sandpoint baseball was just two runs away from a trip to state last year and this group of five seniors is determined to get the Bulldogs back to the big dance. Pictured (from left): Anthony Arroyo, Ethan Edlund, Carter Envick, Tyler Lehman and Conrad Becker.
(Photo by DYLAN GREENE)

It was a heartbreaking loss, there’s no getting around that. Just ask senior Tyler Lehman who was standing on third base when the Hawks got the third out to secure the regional title and a trip to state.

But the feeling around the team is the crushing defeat has made the Bulldogs stronger this season and prepared them to face any adversity that stands in their way.

Lehman is using the district series loss as motivation and believes the team has now learned how to play in contests with everything on the line.

“Just how close we were and getting all that experience to be in those tight games like that I think will really help us,” he said.

Senior Anthony Arroyo shared a similar sentiment but said the loss was tough to get over.

“I was pretty disappointed,” he said. “I got really emotional, it sucked.”

When all was said and done in 2019, Sandpoint finished with a 9-16 record. Head coach Chase Tigert admitted that it was a disappointing season and said they didn’t click like he was expecting due to a number of factors including their schedule.

“I think we played the hardest schedule Sandpoint baseball has played in the last 20 years,” he said.

Last season, the Bulldogs traveled to Boise to compete in the Bucks Bags Tournament when they faced some tough 4A schools down south in Minico, Vallivue, Jerome and Mountain Home. The team went 1-3 in those games.

“I think because we played those games so early on,” Tigert said, “and we didn’t play very well, it kind of had an affect on our kids confidence and it took us pretty much the entire season to kind of build that back up.”

But once the Bulldogs found their rhythm late in the season, they showed signs of a team capable of competing at state.

“You look at the record, 9-16, and it’s nothing to really write home about,” Tigert said, “but the fact that we did pull it together the last two weeks of the season, we did start meshing and we did start coming together ... that was really exciting.”

And Sandpoint is looking to build off that success and carry that momentum into their first few games of the season. So far, Tigert likes what he sees.

“Starting ,I wasn’t exactly sure where we would be but I’ve been very impressed with where we are right now,” he said, “and I would say ... this time this year compared to this time the past three years, I think were actually in a better place right now.”

The Bulldogs lost eight seniors from last year’s squad but return 12 varsity players. Given the experience and talent coming back, Sandpoint is expecting to get back to state after making it back to the dance for the first time in over a decade in 2018.

Lehman is the only player left on the Bulldogs team that was a part of that state squad so he’s eager to get another crack at getting a trophy.

And despite only having five seniors on this year’s team, Sandpoint is pretty experienced as injuries last season allowed plenty of underclassmen to gain extended playing time.

Juniors Cameron Garcia, Max Thielbahr and all-league third baseman Avery Bocksch will all play pivotal roles this season. One player the Bulldogs will surely miss is all-league pitcher Ethan Butler, who stepped up in his freshman season in 2019 and became one of the team’s most reliable players. Unfortunately, Butler suffered an injury during basketball season that will prevent him from taking the mound for the Bulldogs this year.

Despite not being able to play, Butler is sticking around and helping the team at every practice. Tigert said that’s the sign of a true teammate and he expects Butler to be back stronger than ever in 2021.

Lehman enters the season as the Bulldogs No. 1 pitcher once again and he worked on his control during the offseason.

“My walk numbers were really high so it’s just staying in the zone and having faith that the seven guys behind me and the one guy in front of me will make plays,” he said.

When Lehman isn’t at pitcher, he’ll be making plays in the outfield for the Bulldogs. He can do it all and Sandpoint will need him to be at the top of his game all season.

“I’m looking for big things from him,” Tigert said about Lehman, “and he’s got the potential to go out there and dominate from time to time.”

Lehman, Arroyo and fellow senior Carter Envick all plan on leading the team this season. Lehman wants the team to be all in on getting better every practice and not be complacent, and Arroyo believes the Bulldogs are taking things more seriously.

“Compared to last year,” Arroyo said, “I feel like we’re not joking around as much, we’re just showing up and getting what we need to get done.”

Just like every season, the team will spend about the first month of the season practicing inside the SHS gym so the Bulldogs can’t wait for their season opener.

“We’re ready to hit the field,” Envick said. “Being in this gym is not the same.”

In order to get back to state, Tigert wants his team to be locked in mentally and not worry about what’s happening outside of baseball.

“We’ve been really focusing on the small things,” he said, “and focusing on what we can control and I think if we go out there this year and we focus on our attitude, we focus on doing the little things that most people overlook ... I think we’re going to be in a really good place this year.”

The seniors plan on grinding every single day to make sure they don’t get distracted from the goal and want to be role models for the kids coming up to look up to.

“I just want people to know I’ll always be there for you to succeed,” Lehman said.

The Bulldogs are confident they are better than Lakeland but Tigert doesn’t want any other team to dictate how they perform.

“I feel like it comes down to what are we going to do,” he said, “and we can’t let the name Lakeland or the name Moscow have any kind of affect on us. It’s got to be just our game ... and if we do that, I think we’ll be tough to beat.”

Sandpoint opens the 2020 season with a doubleheader at Clarkston 1 p.m. Saturday.

Sandpoint baseball was just two runs away from a trip to state last year and this group of five seniors is determined to get the Bulldogs back to the big dance. Pictured (from left): Anthony Arroyo, Ethan Edlund, Carter Envick, Tyler Lehman and Conrad Becker. 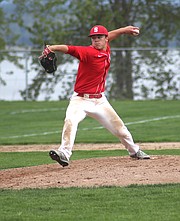 (File Photo by ERIC PLUMMER) Senior Tyler Lehman, Sandpoint's No. 1 pitcher, has hopes this season and wants a district title more than anything.