CLARK FORK — Amidst the condos at Pend Oreille Shores Resort in Hope sits a single tennis court. During the spring when weather permits, this is the place the Clark Fork tennis calls home.

It’s small and only allows at most two doubles pairs to play at one time, but the players are grateful to have it.

“They’re just happy to have a court,” head coach Jeff Emmer said. “There’s always somebody who has it worse.”

When the Wampus Cats can’t practice outside, they play indoors at the Filling Station Youth Center in Clark Fork. Just like the resort, the center has one court but it is isn’t your typical tennis court. Instead, the hardwood surface is used for pretty much anything so kids have somewhere to go and be active when a North Idaho winter blows through.

Given that, it’s not the ideal surface to play tennis on but the team embraces it and enjoys the challenge.

The Wampus Cats are eager to get the season started and Emmer has hopes for his team of seven players.

“In a lot of ways I think it will be my best squad consistently through the whole lineup,” Emmer said.

The squad is much smaller from last year’s team of 16, but the talent coming back will allow Clark Fork to do some damage when districts roll around.

Clark Fork’s No. 1 boys doubles pair of Williams and Simko is back after making it to the second day of state last year and Kiebert returns after qualifying for state in doubles in her first year playing on the team. But her doubles partner, Lily Simko, has graduated leaving her without one.

Myers is the only other girl on the team and Kiebert played with her on the volleyball and basketball teams this season so there is certainly some chemistry there but Emmer is unsure if they will be a doubles pair or Kiebert will play singles on her own. Time will tell but Emmer isn’t worried about it.

“We’ll just have to see how the year develops and where she goes,” Emmer said. “I’m sure she’ll make it to state in whatever event she is in but I’d like to see her get some wins under her belt down there.”

Like every sport Kiebert takes up, she excels and Emmer wasn’t surprised that she was able to have such an impact right away.

The duo of Williams and Simko has been to state the last two years and has no plans on slowing down anytime soon. Emmer said he expects the pair to keep getting better and more confident each year they make it to state.

“That was a real eye opener for them to go down there as freshmen,” Emmer said.

When Williams joined the team, Simko was the only other boy on the team so they were kind of forced to be a doubles pair but he’s glad that happened.

“I like playing with Wes,” Williams said. “He’s a good teammate.”

Williams used to play baseball but when he saw how much people enjoyed tennis, he switched it up.

“I always just thought it looked fun so one year I just decided to try it,” he said.

Williams hasn’t set any goals for what he wants to accomplish with his doubles partner this season at state , he just wants to continue to improve.

Kiebert has been looking forward to getting outside of the gym she is usually stuck in playing basketball and volleyball and has been able to make the transition from basketball season seamlessly.

“It’s just so fun because tennis is such a friendly sport and you don’t have to push people around,” Kiebert said.

Throughout her high school sports career, Kiebert has been regarded as a vocal leader thanks to her competitiveness and fearlessness, and she plans on doing just that in her final season on a Clark Fork team.

“I like tennis because you know it’s on you,” she said. “Since there is not as many people it’s like you control your emotions.”

Kiebert is glad she gets to wrap up high school playing tennis because it’s calming, stress free and allows her a little more free time to fill out scholarships for college.

When Emmer isn’t coaching the Wampus Cats, he’s a self-employed building contractor. Emmer builds time around his schedule to make sure he can coach the team when spring comes around and he enjoys every second of being with the team. 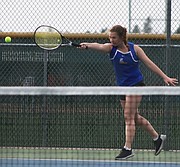