Fern was born in 1933 in Weiser, Idaho, to Mary and Leslie Guilford. She grew up with her brother, Joe, and many cousins, and enjoyed the rural setting of her extended family.

Fern married Bill Watt in 1953, after meeting at Idaho State University, where she was studying home economics. They spent their summers commercial fishing on Lake Pend Oreille in a small aluminum boat and they easily pulled in their daily limit. They got caught in few big storms on the lake, barely making it home at times. They often reminisced, with great fondness, about their fishing days as a young couple.

After Idaho State, Bill joined the United States Coast Guard and the couple moved to Astoria, Oregon, and Ketchikan, Alaska. Their time together in Alaska was Fern’s most cherished memories. After Bill was discharged from the USCG, Bill and Fern moved to Costa Mesa, California, where he worked for aerospace manufacturer McDonnell Douglas while Fern managed their family of four children.

In 1969, while working for Mc- Donnell Douglas, Bill invented a motion feedback device for industrial automation called the Cube Encoder. The Cube Encoder revolutionized the field of industrial motion control and became an industry standard. With the new invention, Fern and Bill founded Encoder Products Company that same year, with Fern as treasurer and corporate secretary. In 1972 they moved their startup company to Sandpoint in order to raise their children in the same beautiful small town where Bill had grown up.

Over the following years, Fern and Bill built Encoder Products Company into a world-class manufacturer and assembled an engineering department that continues to design and develop high quality, precision encoders for the automation market. Bill passed away on February 14 of this year, but Fern and his wishes were for the company to continue on in the community, which it will through a family trust and its board of directors.

Fern always had a thirst for knowledge and she kept up on current events, reading various newspapers from end to end as well as other periodicals. Fern took up many hobbies over the years, including photography, stained glass, drawing, calligraphy, needlepoint and crochet. Her attention to detail made her excel at all of them. Later in life, Fern became a fervent doll collector and oftentimes sewed intricate Victorian dresses for her dolls. She was part of the Spokane Doll Collectors Club and a member of a Spokane sewing club, whimsically called Stitch and Bitch. Fern and Bill traveled to many parts of the world for business and for pleasure. They also enjoyed relaxing in Kona, Hawaii for part of the year.

Fern was a devoted wife, mother, and grandmother. Her children and grandchildren were top priority. She was always looking out for them. Fern’s utmost devotion was to Bill. They were very special to each other and loving to the end. Bill’s passing in February was hard on Fern, but now their spirits are united once again. Fern was very kind person with a high sense of responsibility and duty. She loved to hear stories from her children and grandchildren and listened intensely with great enthusiasm about their experiences. Her devoted attention and laughter will be deeply missed by all of her family.

Due to the current COVID-19 restrictions, a celebration of life has not yet been scheduled.

A private family burial will occur at a later date, when Fern and Bill will be laid to rest together. Lakeview Funeral Home is handling the arrangements. 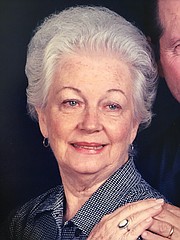