(Photo by DYLAN GREENE) The Victory Bell rose above War Memorial Field once again on Tuesday. The original tower first installed by the SHS class of 1961 was taken down last summer due to safety concerns.

(Photo by DYLAN GREENE) Last year when the Victory Bell wasn’t in its tower, Brody Durfee would haul it to every football game on a trailer. The rest of the time it sat in Durfee’s garage.

(Photo by DYLAN GREENE) This plaque on the base of the pole holding the victory bell has the name of every member of the SHS class of 61’ on it and it was made by Jim Thompson.

(Courtesy photo) This photo shows the original Victory Bell that was installed in 1960.

The bell, donated by the Sandpoint High School class of 1961 during the summer of their senior year, had sat on a platform about 40 feet up in the air until last summer when the bell and the pole that held it up were taken down due to safety concerns.

Brody Durfee, owner of Durfee Construction LLC, took the lead on the project when Friends of Memorial Field told him the bell needed “a face lift.”

When Durfee went to look at the bell last summer, the platform holding it up could be rocked back and forth about 3.5 feet each way and the wood columns were cracked and rotted.

“It was done,” Durfee said.

Durfee then called the city and got the approval to tear it down. Durfee wanted to get the bell put back up before the start of the 2019 SHS football season but at the time the contractors who are currently installing artificial turf at War Memorial Field were unsure of how the placement of the bell was going to impact their plans, so the project was delayed until this summer.

But it all came together on Tuesday. Kootenai Excavators dug the foundation for free, three steel columns wielded together were stuck in the ground and a “kennel” holding the Victory Bell was placed on top of the pole by crane.

The 44-foot structure stands tall just left of the concession stand on the south end of the field and the infamous white V for victory can be seen clearly from Ontario Street.

Mountain Metals constructed the pole and the kennel but Matt Kerr did all the architectural work on his own time without receiving a penny.

The $30,000 for materials was paid for by Friends of Memorial Field and all the hours Durfee put into facilitating the project came free of charge as well.

Durfee’s wife, Abigail, is a SHS graduate and he realizes how important the Victory Bell is to the community so they did everything they could to make the new and improved one identical to the original.

“There is so many stories attached to the bell, we didn’t touch the bell,” Durfee said. “Paint is chipping on it and there’s names still carved on the inside and outside, so we didn’t do anything to the bell.”

When the idea to take down the original bell arose, Athletic Director Kris Knowles reached out to Duane Ward, who has coached in Sandpoint for over half a century, to run the idea by him. Ward was a member of the 1961 class that constructed the Victory Bell tower and gifted it to the school.

After seeing a mock-up of the new structure and discussing the proposal, Ward and his classmates gave their approval to move forward with the project.

“We knew the time was coming that it would have to be redone, but it was important to keep the old tradition going,” Ward said.

The history of the bell

The class of ‘61 wanted to do something for the school that would leave a lasting legacy and the Victory Bell did just that.

The bell itself came from the Old Farmin School were the U.S. Bank is currently located, according to Ward. The father of 1961 graduate Bill Jacobson was the maintenance supervisor of the school district back then and he acquired the bell when the school was torn down.

The wooden poles were donated by the dad of Julie McFarland, who owned McFarland Pole Company. Metal tags with each students name from the class came courtesy of McFarland as well and the tags were originally spiked into the pole by George Eskridge and Jim Thompson out of fear that some Coeur d’Alene or Lewiston students would try to steal them.

The name tags were eventually replaced by a plaque made by Thompson that has the name of every class member on it.

The design for the bell tower was conceived by Thompson and the rest of the victory bell committee. Well known local artist Russ Kotschevar also had some input on the design.

The first use of the Victory Bell coincided with legendary coach Cotton Barlow’s 100th victory at SHS, a 24-0 shutout win over Bonners Ferry. That season the Bulldogs went undefeated (8-0-1) and Ward was a member of that team.

Following every Sandpoint victory, the bell was rung once for every point the team scored in the game. Ward said it was a big deal.

“As soon as the gun went off to end the game everybody rushed out to ring the Victory Bell,” he said.

Ward said every member of the ‘61 class had a hand in making the victory bell what it is today.

Last year, the bell was mounted to a trailer and brought to every Sandpoint football game by Durfee. Since the season ended the bell has been sitting in Durfee’s garage collecting dust and he’s glad to finally see it back in the place where it belongs.

Every time Ward sees the bell he thinks about all the memories he had with his classmates and the tradition it carries with it. The bell’s meaning goes well beyond the football field, he said.

The final few details are still being put on the tower to secure it but Durfee doesn’t expect the new Victory Bell to come down anytime soon. 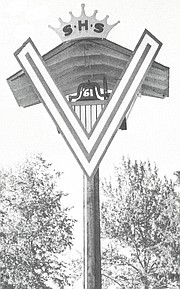 (Courtesy photo) This photo shows the original Victory Bell that was installed in 1960.

(Photo by DYLAN GREENE) This plaque on the base of the pole holding the victory bell has the name of every member of the SHS class of 61’ on it and it was made by Jim Thompson. 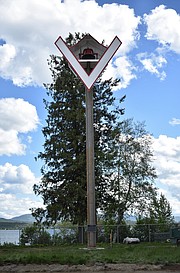 (Photo by DYLAN GREENE) Last year when the Victory Bell wasn’t in its tower, Brody Durfee would haul it to every football game on a trailer. The rest of the time it sat in Durfee’s garage.