Local man's steamboat story to air on TV next month

A photo of the Sunnyside Queen.
(Photo courtesy MARIA LARSON)

Madison Larson poses for a photo in a "Sunnyside Queen" polo shirt.

Madison Finlay and his wife Marianne Finlay pose for a photo together.

SANDPOINT — When Madison Finlay first visited Sandpoint in the 1930s, he told his family, the lakes were full of steamboats.

Many of the roles steamboats once filled were taken over by trains and cars said Forrest Burger, a producer at Idaho Public Television’s Outdoor Idaho series.

Burger, whose special on Madison’s story will air Dec. 6 as part of Idaho Public Television’s Idaho Experience series, became acquainted with the story years ago after Larson was interviewed for “Pend Oreille Country,” an episode of the Outdoor Idaho series that aired in 2019.

“About a year later they called me and one of the gals got in touch with me and said, ‘didn't you have an idea for a story?’” Larson said. “By this time she was about ready to retire, but she passed it off [to Burger.]”

Even though the steamboats on Lake Pend Orielle had disappeared, they had entranced Madison, his daughter said. He had already bought land in the Sandpoint area, and in 1964 began building his own steamboat while still residing in Redlands, California.

“Madison was kind of a sailboat guy in California,” Burger said. “But [he] kind of got enamored by steamboats.”

The family moved to Sandpoint, and for the next several decades, the steamboat was Finlay’s project, Larson said.

“[It was] the main focus of my father's last 50 — the last 50 years of his life was building this boat,” she said. “It's called the Sunnyside Queen. Because his place was out on Sunnyside.”

The 35-foot-long, 7-ton steamboat was her father’s “epitaph,” she said. Her father — welder, machinist, and mechanic — was humble, she said, but his family knew how much work went into it.

After Finlay’s passing, Larson said, the steamboat began to fall into disrepair. That’s when the family met Matt Janssen — a local who just so happened to be a steam engine expert.

“I told them I’d fix the mechanical for a ride on the steamboat,” he said. “I had it runnable in a week.”

When he was 10 years old, Janssen said, he got to visit the SS Jeremiah O'Brien, a steam-powered ship built during World War II. That visit sparked his love of steam engines.

“I knew I wanted to work on something like that,” he said. “I guess I’m doing pretty well.”

Eventually, the family decided the upkeep was too much for them, so they decided to sell the Sunnyside Queen to Janssen — for $1.

“The Sunnyside Queen showed up, and I’ve tried to be a good custodian of it,” he said.

Burger said he’s thankful to have been able to air the story.

“I’m just glad I found a home for it,” he said. “Sometimes you research things and you take video, and it doesn’t work out.”

The episode schedule has not been finalized, Burger said, but the roughly 9-minute program will either air at 7:45 p.m. or 9:15 p.m. on Dec. 6. during the station's annual pledge drive.

Editor's note: This story was amended to correct the spelling of Forrest Burger's last name.

Madison Finlay and his wife Marianne Finlay pose for a photo together. 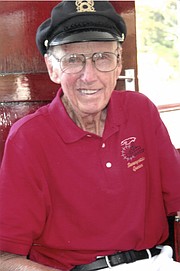 Madison Larson poses for a photo in a "Sunnyside Queen" polo shirt.