The Sandpoint boys soccer team poses for a photo with the district championship trophy.
(Photo courtesy of JASON DUCHOW PHOTOGRAPHY)

Senior Zander Moore goes up for a header during Thursday's 4A Region 1 championship.
(Photo courtesy of JASON DUCHOW PHOTOGRAPHY)

Sophomore defender Evan Dickinson clears the ball during the second half of Thursday's game.
(Photo courtesy of JASON DUCHOW PHOTOGRAPHY)

Junior Shane Griffin fights past a Moscow defender during the second half of Thursday's 4A Region 1 championship game at War Memorial Field.
(Photo courtesy of JASON DUCHOW PHOTOGRAPHY)

SANDPOINT — The ultimate redemption story has been completed.

After falling to Moscow two straight years in the 4A Region 1 championship match, Sandpoint boys soccer is back on top.

The Bulldogs downed the Bears on Thursday to secure their first trip to state since 2017.

"It feels good," head coach Tanner French said about being crowned district champs. "The boys definitely earned the W tonight. I'm proud of them. There's only one player on this current roster that's been to the state tournament, it's unbelievable. Now 20 of them can say they've been to a state tournament. That's an overwhelming feeling for some of them, so hopefully it becomes the norm and we can go down to Idaho Falls and make some noise."

French said all the preparation and extra hours after practice paid off.

"They wanted it and I've felt all season they've wanted it, but they had to walk the walk and tonight I felt they did that," he said, "and they enjoyed it, that's the biggest thing. When you have that mentality of 'Hey, I'm going to work as hard as I can and enjoy it,' I mean that's why we play sports."

Senior captain Zander Moore led the way for the Bulldogs tallying a pair of goals.

"I'm happy for Zander," French said. "He always seems to show up in the postseason."

From the opening kick, Sandpoint controlled possession. The match was theirs for the taking, all they had to do was find the back of the net.

Fortunately, Moore was in top form Thursday and capitalized when Moscow had a hand ball in the penalty box. In the 27th minute, Moore stepped up and buried the penalty kick to give Sandpoint a 1-0 lead.

The Bulldogs took that advantage into halftime. Sandpoint outshot Moscow 7-1 in the first half.

The boys turned up the pressure in the second half and rang a pair of shots off the side of the net. All the momentum the Bulldogs built on attack finally paid off in the 70th minute when a perfect cross by Canyon Nash found the head of Evan Darling. He cashed in the goal to make it 2-0.

Moore added an insurance goal with about a minute left in the match to secure the 3-0 victory for the Bulldogs.

Sandpoint held the Bears to just two shots. French said the entire team executed well defensively and stuck to the gameplan. He had no complaints.

"I'm proud of our team defensively to work to get behind the ball," he said. "That's something that we had been speaking about the past few days is keeping them in front and make them make the mistakes."

The Bulldogs (5-4-3) now wait to see who they will play in the first round of the 4A state championships that start Thursday, Oct. 22, at Bonneville High School.

Junior Shane Griffin fights past a Moscow defender during the second half of Thursday's 4A Region 1 championship game at War Memorial Field.

Junior Evan Darling heads in the second goal for the Bulldogs.

Sophomore defender Evan Dickinson clears the ball during the second half of Thursday's game. 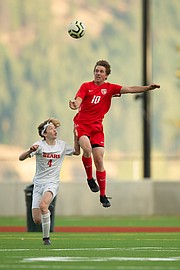 Senior Zander Moore goes up for a header during Thursday's 4A Region 1 championship.

Sophomore goalkeeper Roman Jiles makes a save in traffic on Thursday.