A call for tolerance, inclusivity

Crews work to install a temporary art project entitled the “Inside Out Project” — an effort to promote inclusivity and tolerance — on the corrugated tin granary building.
(Photo courtesy MARSHA LUTZ/MARSHA LUTZ PHOTOGRAPHY)

A temporary art project entitled the “Inside Out Project” has been installed in the granary district in Sandpoint; in fact, it’s on the corrugated tin granary building itself. Large-sized black and white photos of 28 smiling Sandpoint-area residents don the building.

The weather was cold on Saturday, Oct. 17, but layered-up walkers stopped and peered into the sky watching the volunteers in a man-lift truck use wheat paste to adhere the photos onto the granary.

Young participants in the project were there, and articulately expressed heartfelt reasons why they were proud to be a part of the inclusivity and tolerance project, and what it meant to each of them.

Overseeing it all was professional photographer Marsha Lutz, whose idea it was to bring the global show to Sandpoint.

The effort was sparked by hate literature Lutz received at her door in the past few years. “I knew we needed to do one here,” she said. Lutz found “a wonderful group of young people” who hold respect for all residents and visitors to Sandpoint, and who stand for equality-for-all. They agreed to participate by having their photos taken by Lutz for the exterior art show, which will eventually be destroyed by the elements. A poster explaining the project has been installed, as well.

Lutz said the portraits are each 3x4 feet and because they are pasted up with wheat paste, it was a non-toxic installation. They were taken of local community members, ages 7 to 70, who represent many others living in North Idaho who strongly share in the belief for human rights for all. “Our goal is to draw awareness to our cause, advocate for change, start a conversation, strengthen our community, and stand up for what we believe in,” she wrote online.

To take part in the global “Inside Out Project,” the group was required to submit a group action statement. Together they wrote a statement declaring: “Our group action stands for tolerance, inclusivity, and respect for all citizens and visitors. We believe that by respecting and celebrating each other’s differences, we create a loving place that everyone can be proud of.

“North Idaho has a complicated history of intolerance, and white supremacy reaching back decades. With the “Inside Out Project,” we aim to acknowledge this history; and in doing so promote more tolerance through meaningful dialogue and conversation. With this project, we declare that in this Idaho, there can be no room for hate,” they wrote. The young people offered names of others in the community they knew shared these values; these people were contacted and photographs taken.

Names of the participants are not shared, Lutz said. “We want to be protective of the group,” she said, given that some Sandpoint-area residents have been hassled about their “Love Lives Here” yard signs, and because many of those photographed are quite young. Sandpoint has historical and present-day struggles with tolerance, and residents are expressing concerns about the presence of three trucks in Sandpoint waving Confederate flags, as well as a garage/house on North Division displaying the same. Just last week, on Oct. 16, the Daily Bee reported on the death of “Eric Mark-Matthew Allport, 43, a former Boundary County resident, (who) may have been involved in a plot to kidnap Michigan Governor Gretchen Whitmer,” but who was killed by federal agents when they were met by gunfire.

“With 28 pictures, this will give local people who are indifferent some understanding through recognition” of familiar Sandpoint-area faces. Lutz believes the photos show diversity and will open up conversation when drivers and walkers go by. One of the young people whose picture is on the wall, said, “You can’t address ignorance by telling people they are wrong.”

Paul, whose photo is on the front of the granary and whose son was up in the bucket pasting on the photos, said, “Art bridges gaps. It touches a vulnerable part of the soul through its beauty. You look up and see these photos and you see how connective it is—you are reminded that behind these faces there are rich lives and stories,” he said.

The art show has been expensive to produce, and donations are needed to break even and for the rental of a man-lift when it’s time to power wash the building in the spring. To show support, follow Facebook’s Sandpoint Inside Out Project page or find them on Instagram at sdpt__insideoutproject. Donations may be mailed to Inside Out Project PO Box 1994, Sandpoint, Idaho 83864. Any donations received beyond the cost of the project will be sent to Bonner and Boundary County Human Rights Task Forces. 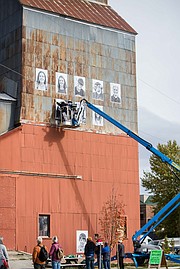 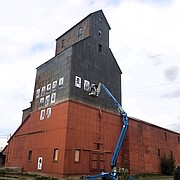