Previous Next
by CRAIG NORTHRUP
Hagadone News Network | September 8, 2020 1:00 AM

Ernie Mueller sat in the Riverstone Starbucks Friday to take a break from the heat as the temperature hit 90 degrees, sipping on his Frappucino to cool down. Where he’s from, the temperature was a stifling 32 degrees.

While he and his family originally had no plans of coming to North Idaho for Labor Day weekend — the information technology professional was temporarily relocated to Seattle for what was supposed to be a three-month stay in February, less than two weeks after a Snohomish County man became the first person in the United States with a confirmed case of COVID-19 — Mueller said he’d heard of the vast, shimmering lakes and breathtaking beauty of the area from his wife, who eventually convinced him to take her and their 9-year-old son.

“And she was right,” he admitted with a smile. “She was right for us to come here. The Panhandle? It is beautiful."

“Everything’s been going great with the re-branding so far,” chamber president and CEO Derrell Hartwick said. “Everybody’s been loving it. The (chamber) board’s been saying they’ve been getting a great response.”

The re-branding that unofficially kicked off Aug. 2 when Hartwick announced the changes were promptly followed up with a membership drive, he said the chamber had taken in roughly 90 new members and membership upgrades. With a new logo and re-vamped website to boot — still found at cdachamber.com — the changes are part of what Hartwick described as an aggressive push to expand membership outside Coeur d’Alene.

“About 35 percent of our membership is outside the city limits,” he said. “We want to reach out to those other markets to generate new interest.”

So far, it’s worked. Of the 90 new members taken in as part of the membership drive, Hartwick said approximately 30 came from outside Coeur d’Alene, 10 of which can be found outside Idaho.

“We had a couple contractors that do business here,” he recalled, “but they’re homebased in different states. We had a business out of Colorado — Denver — that joined. Really, it was a very welcoming process, and a great community effort.”

But while the Coeur d’Alene Regional Chamber is looking to expand its horizons, other chambers are continuing to carve out their own roles in the area. The Hayden Chamber of Commerce, for example, still serves the greater Hayden area while seeking out new members from around North Idaho.

Johnson said the Coeur d’Alene Regional Chamber’s recent changes don’t impact how Hayden’s chamber will move forward, and the Hayden Chamber of Commerce will continue to serve its members and the area.

“We all play nicely together,” she said. “I’m always a collaborative person, and I’ve led the chamber that way, but we each serve differently. Ours is a chamber with a small staff and a local membership, so we invest our resources differently that way.”

Membership hasn’t yet been negatively impacted by the Coeur d’Alene chamber’s re-branding — Johnson said the Hayden Chamber of Commerce was actually gaining new members — and that her organization, like Hartwick’s, was moving forward.

“We had to cancel our yearly banquet,” Johnson said, “so we’re having an online auction. We’re also working with Dreams Are Forever to put on a Halloween Spook-tacular on Oct. 30 and 31. It’s tentatively scheduled at the Lake City High School parking lot. We’re very excited about that.”

The Hayden chamber is also in the process of organizing a series of meetings to help the community’s working parents challenged with homebound students.

“Our role is really about helping our community,” Johnson said. 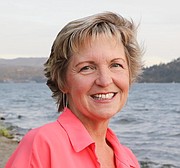