COEUR d'ALENE — The Sandpoint swim team opened its season this Saturday at the Kroc Center and the boys and girls each took second in the meet.

Despite the event being in Coeur d'Alene, the Bulldogs hosted the meet. Only essential personnel were allowed inside for the event. Head coach Greg Jackson said it was strange not having fans, but he didn't notice too much of a difference because of the spirit of his swimmers.

"As a coach, I almost didn't realize just because I'm constantly focused on the kids," he said, "and the meet and what's going on there ... but it was a little bit quieter not having the fans. But it was amazing to see our kids, their team spirit was huge. There was always someone walking up and down the pool cheering on someone that was swimming. We have that all the time anyways, but it really stood out just with the lack of spectators how much our kids support each other."

Prior to Saturday, swimmers that compete year round on the Sandpoint Sharks club team hadn't raced in the pool in about six months due to the coronavirus pandemic. Jackson said it was great to see his kids competing against other schools again after an uncertain offseason.

On the girls side, Sandpoint, the defending 4A state champs, finished runner-up to Coeur d'Alene by 29 points. The Bulldogs edged out Moscow for second by 12.

Sandpoint won four of the 11 events and senior Kate Bokowy captured first in the 200 individual medley and 100 butterfly to lead the team.

"I think Kate may have had the best meet that she's had in two or three years," Jackson said about Bokowy's performance.

The team was without senior Autumn Morgan.

Jackson was proud of his four sophomores for stepping up and showing what they are capable of.

"They're always exciting to watch," he said. "They're full of energy and they brought that same energy from last year into this year."

The boys also had an impressive showing. The Bulldogs beat out Coeur d'Alene by six points and finished 38 points behind first place Moscow.

Jackson said Moscow competing virtually may have impacted the results because he believes everyone would have swam faster with side-by-side action.

"I think our boys are very good racers," he said. "I believe that virtual meets put us at a slight disadvantage. Our boys when they got someone in the water right next to them, it's a whole different animal for them. I don't know if we could have beat Moscow but I think we would have seen at least some faster swims out of our boys."

Jackson said Hayden really stood out in the 100 breast.

"He had a very tight race and he just kept his technique solid the entire race," Jackson said. "He didn't rush it. To see him poised and composed throughout that entire race was really neat."

Sandpoint's 200 free relay team made up of Nielsen, Leavitt, Caleb and Aitken captured first, edging out Moscow by less than a second. Overall, the boys won three of the 11 events.

The Bulldogs provided all the officials, timers and volunteers for the meet and Jackson thanked all the families of the swimmers for coming together and making it possible.

"The parent group that we have was amazing," he said. "I didn't have to worry about any of it. They all took care of it."

Sandpoint returns home to host a meet at the Litehouse YMCA at 11 a.m. on Saturday, Sept. 26. 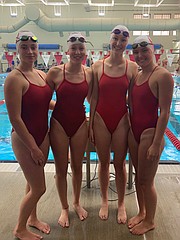