The Sandpoint boys and girls swim teams were both named finalists for North Idaho Athletic Hall of Fame Team of the Year awards.
(Photo courtesy of JASON DUCHOW PHOTOGRAPHY)

COEUR d'ALENE — A total of 18 local athletes were chosen as finalists for the 2021 North Idaho Athletic Hall of Fame High School Awards.

The finalists were announced this weekend and the winners will be announced at a banquet on Saturday, April 17 at The Coeur d'Alene Resort.

The Sandpoint swim team received plenty recognition for their efforts this fall. The girls and boys teams were both named finalists for the Team of the Year Awards. They both placed second at the virtual 4A state championships this past season.

Sandpoint's Parker Pettit, Tag Benefield and Wes Benefield will all be vying for the 5A-4A football award. Zander Moore and Chris Koch are both in the running for the boys soccer award, and Nikolai Braedt and Jett Lucas are up for the boys cross country award.

Gabby Hicks was named a finalist for the 5A-4A volleyball honor. Kaylee Banks earned recognition in the 5A-4A girls basketball category and Colin Roos received a spot on the boys side of the award.

Nominations for each award are reviewed by the North Idaho Athletic Hall of Fame committee, which selects the finalists and winners for each category. Each finalist receives a certificate and the winners also receive a plaque. The athlete, coach and team of the year awards receive trophies.

All winners for the categories listed below as well as the Hagadone High Character Award will be announced at the banquet.

Here are the finalists for each award (local athletes are in bold): 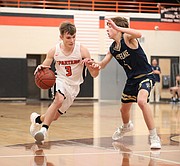