Will Valentine and Bob Camp examine a bell, later determined to be the city's "lost" bell at Way Out West Antiques in Spokane. The store's owner, Mike Ferguson, agreed to sell it to the Music Conservatory of Sandpoint, so that it could once again become a beacon for the community.
(Photo courtesy KARIN WEDEMEYER)

Will Valentine and Bob Camp inspect the old Sandpoint City Hall bell as it sits outside Way Out West Antiques in Spokane.

Karin Wedemeyer rings a bell which once sat atop Sandpoint City Hall, now the Music Conservatory of Sandpoint. After missing for decades, the bell was discovered at Way Out West Antiques and is headed home to Sandpoint.

The day after Bonner County Historical Museum officials announced they were on a mission to find a missing Sandpoint city bell, Bob Camp popped into the research room.

The longtime Bonner County Historical Society volunteer and former museum board member didn't say much. Instead, wearing a mysterious smile, he simply sat down at a computer and launched Google Maps.

Executive Director Heather Upton said hello, but quickly returned to fielding calls about possible whereabouts of the bell. That is, until she happened to look over and saw Camp zooming in on something large, pendulous, and bronze-colored.

"Bob zoomed in, and there was the bell," Hannah Combs, museum administrator, said in a press release. "Or at least some enormous bell on a frame made of steel I-beams. He zoomed out, and it appeared to be in an unassuming field outside of Spokane."

Their attention was immediately captured, museum officials said in the release.

As the new owner of the 109-year-old building, the Music Conservatory of Sandpoint launched a campaign to renovate the Old City Hall and bring back many historic touches lost in past remodels. Key among them was finding out just what had happened to the bell which once warned of nearby fires, signaled the start of curfew and rang in celebration upon the ending of the first and second world wars.

Camp had been tipped off 12 years ago that the missing bell was "alive" and living in the Spokane area. Camp and fellow researcher Bill Fulton followed up on the tip, tracking the bell to Way Out West Antiques — well-known to passing motorists for its enormous animal statues. When he learned the museum had team up with the music conservatory to track down the bell, Camp didn't hesitate to head straight to the Bonner County Historical Museum.

Upton immediately called Way Out West's owner Mike Ferguson, who remembered Camp and Fulton's visit and their examination of the large bell. As Upton talked about the bell's importance to the community, Ferguson was touched, telling museum officials that the words spoke to his heart.

Ferguson, who had acquired the bell from collector Greg Daepke, told museum officials that the bell had brought him a lot of joy over the years and he'd never wanted to sell it despite many offers. This time was different — this time it was headed home, to people who would love it and care for it as much as he did.

"As thrilling as the discovery was, and though the details seemed to click into place, as historians we couldn’t jump to conclusions," Combs said.

After all, a 1952 article in the Sandpoint News Bulletin referred to the bell as “made of casting bronze,” and while painted a bronze color, the bell at Way Out West was cast iron. "Could we prove that the person quoted in 1952 was mistaken?," Combs said. "Or was the entire discovery just a shimmering red herring?"

There was only one way to find out — more research and hands-on examination of the bell. Wedemeyer and museum researchers threw their efforts into confirming the bell was, indeed, the city's lost bell. The MCS director — who trained as an archaeologist before a career as an opera singer — contacted colleagues in Germany who understood bell-making, and the museum's research team unfurled its full potential.

Will Valentine and Combs dug up every reference to the bell that had ever been published in Bonner County, including obscure archives and meeting minutes. Dan Evans scoured the Spokane papers and found the only existing photo in which part of the bell could clearly be seen inside its cupola on Sandpoint City Hall. Jim Watts, who wrote a comprehensive history of the fire department confirmed that researchers were on the right track.

As the research continued, Combs and Upton said the details were lining up — this was Sandpoint's original bell. Armed with that research, Valentine, Camp and Wedemeyer headed to Spokane to again examine the bell.

The trio measured and documented identifying marks and, with support from the museum archives, left confident that this indeed was the missing City Hall bell.

After it was confirmed, Upton immediately texted MCS director Karin Wedemeyer, who'd been on her way to Costco. It wasn't until she glanced at her phone during a brief stop for coffee that she saw the text: "We found the bell."

Instead of Coeur d'Alene, Wedemeyer headed to Spokane.

"Needless to say the check I had did not go to toilet paper," she told the Daily Bee. "We were able to meet with the owner and I purchased the bell."

"It has been amazing being a part of this journey," Upton said. "This is an incredible example of the power of the museum’s archives and the important role that the museum plays within the community. Finding the bell truly embodies our mission of 'history creating community.’”

For Wedemeyer, it's a dream come true.

"We found the holy grail of Sandpoint," said Wedemeyer, noting she's driving past Way Out West — and the bell — many times. "In my wildest dreams, I did not anticipate it was under our nose."

To find it so close to home, for the bell to be in such good condition and for Ferguson to understand the bell's pull for the community and to agree to its sale was truly a "joyous moment," Wedemeyer said. "Ringing it and touching it for the first time felt like I was bringing home a wonderful old friend."

The museum and music conservatory are partnering in the effort to bring the bell home, expected to take place sometime either this month or next, with a concert planned for early June to celebrate the occasion. Once back in town, the bell will reside on the museum grounds until a replica cupola is built atop MCS’s building. Once that happens, the bell will be restored to its original place watching over the town of Sandpoint.

Assured that his bell would once again become a beacon for its community, Ferguson simply said: “I love the happy ending.” 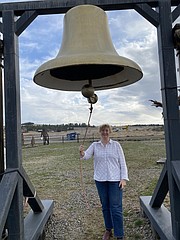 Karin Wedemeyer rings a bell which once sat atop Sandpoint City Hall, now the Music Conservatory of Sandpoint. After missing for decades, the bell was discovered at Way Out West Antiques and is headed home to Sandpoint. 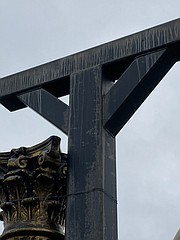 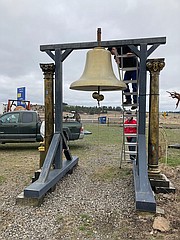 Will Valentine and Bob Camp inspect the old Sandpoint City Hall bell as it sits outside Way Out West Antiques in Spokane. 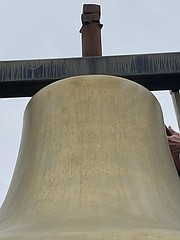 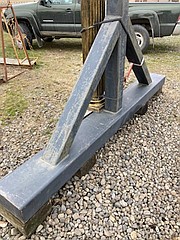 A closeup of the old Sandpoint City Hall Bell. 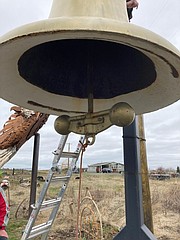