Clark Fork's Hannah Thompson looks to go up for a shot.
(Photo by DYLAN GREENE)

Priest River's Lilly Freitas pulls up for a jumper.
(Photo by DYLAN GREENE)

Clark Fork's Katelyn Matteson turns the corner and drives toward the basket.
(Photo by DYLAN GREENE)

Priest River's Allyson Barton looks to make a move in the post.
(Photo by DYLAN GREENE)

Both teams struggled to put points on the scoreboard, but in the end the Spartans grinded out a 27-19 victory over the Lady Cats.

It was the season opener for Clark Fork and early on they showed some first-game jitters. They committed 10 first-quarter turnovers.

But after that the Lady Cats settled in and gave the 3A Spartans quite the fight. Clark Fork head coach Jordan Adams was proud of her team's effort and execution.

"I told them in the locker room, 'Your first game this year, you're already ahead of where you finished last year without a doubt,'" she said. "They played as a team, they played as a unit."

"That is just who they are," Adams said. "We kind of thrive on defense. We have a lot of hustle on our team and it comes into play in the long run."

The Spartans led for most of the first half and a steal and bucket from Lilly Freitas allowed Priest River to take a 11-9 lead into the locker room.

Clark Fork continued to keep things close early in the second half as Reuter drilled a 3-pointer with 6:25 left in the third quarter to tie the game at 12-12. Both teams couldn't buy a basket in the frame, but the Spartans were able to build a 17-13 advantage heading into the final quarter.

Reuter hit another 3-pointer, but it wasn't enough to keep up with the Spartans who went on a 8-3 run to pull away from the Lady Cats down the stretch.

Clark Fork had a hard time dealing with Priest River's size in the paint. They were outrebounded 45-24. Adams said the Lady Cats have a lot of youth and inexperience in the post and the Spartans capitalized on their size advantage.

"We really have to depend on every single person on our team to crash the boards," she said, "and when they have 2 feet on us that's easier said than done."

Both teams had a tough night at the free-throw line. Clark Fork was 7 of 21 and Priest River was 3 of 18.

Priest River head coach Gary Stewart said he had his best defender — Freitas — defend Matteson most of the night because he knows the senior is a dangerous scorer.

"We knew we had to watch out for Matteson because we've played her two years in a row and she always seems to get double-digits on us just because she's always looking for her shots," he said. 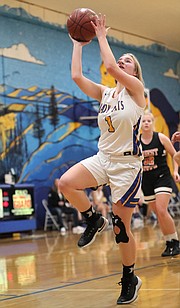 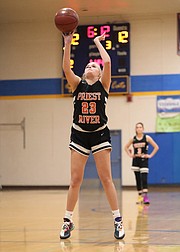 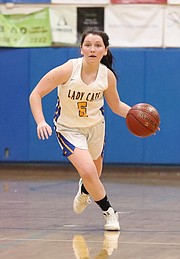 Clark Fork's Lilly Reuter brings the ball up the court. 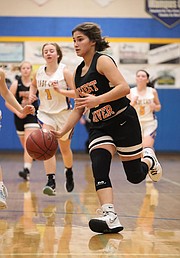 Clark Fork's Paige Valliere brings the ball up the court. 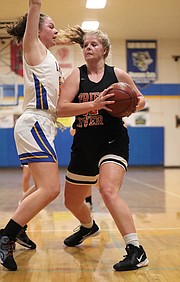 Priest River's Allyson Barton looks to make a move in the post. 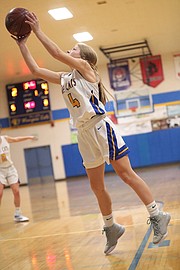 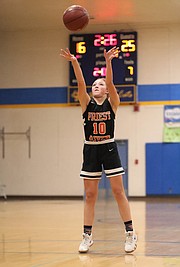 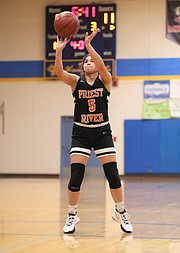 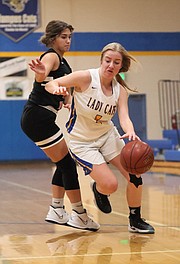 Clark Fork's Katelyn Matteson turns the corner and drives toward the basket.

Priest River's Lilly Freitas pulls up for a jumper. 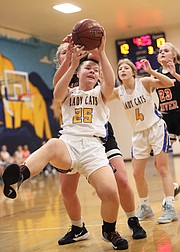 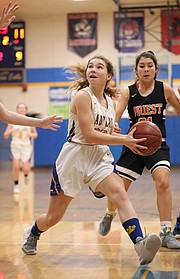 Clark Fork's Hannah Thompson looks to go up for a shot. 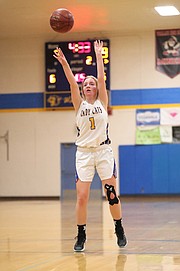 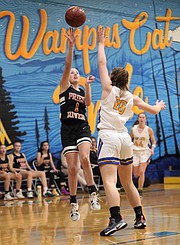 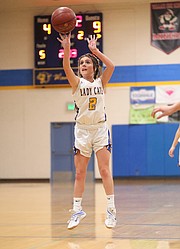 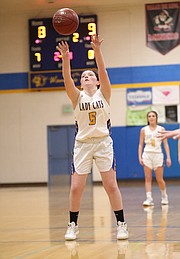 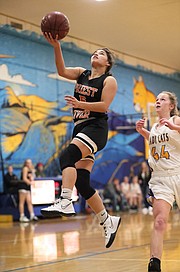