Isabella Waters, 11, competes in a cross country race this past weekend in McCall, Idaho.
(Photo courtesy of VICKI LONGHINI)

Jonas Benson, 12, competes in a cross country race this past weekend in McCall, Idaho.
(Photo courtesy of VICKI LONGHINI)

This highly competitive division includes XC powerhouse teams from Bozeman, Park City, Jackson Hole, McCall and Sun Valley. Several PNSA (Pacific Northwest) skiers were invited to participate in this competition as COVID-19 restrictions in Washington have prevented many athletes from competing in races in that state this year.

The team skied a skate race on Saturday, followed by a classic distance race on Sunday. Distances were 5K and 3K, depending on racer age.

World Championships at Cortina — Mikaela Shiffrin has won the alpine combined gold and super-G bronze medals so far at the World Championships. Interestingly, she has only trained for super-G for four days over the past year — a league of her own. She was followed in super-G by Breezy Johnson in 15th, Bella Wright in 22nd and AJ Hurt in 30th.

On the men’s side, Travis Ganong was eighth in super-G followed by Jared Goldberg in 15th and Bryce Bennett in 27th. Bennett led the men in the downhill by placing 10th. Ganong was 12th and Goldberg took 20th. Bennett was also 16th in alpine combined.

The World Championships continue this week and a full report will be available in next week’s Inside Edge.

Northwest Cup No. 1 — Crosby Schmidt was the only local male racer who competed in the Northwest Cup qualifiers at Mt. Spokane last week. Crosby made big strides, moving from the 62nd start position to finishes of 25th and 33rd in giant slalom. This lowered his points by more than 100.

The second day, Schmidt threw down a solid first slalom, moving up to 14th place. He hooked a gate in the second race and was disqualified, but all-in-all it was a huge weekend for the young man.

Potpourri – Watch for USSS and FIS speed racing on Zip Down later this week. Any comments, recommendations or contributions to this column may be sent to Shep Snow by email at shep@thesnowschool.com. Negative feedback should be sent to someone else. 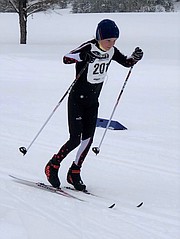 Jonas Benson, 12, competes in a cross country race this past weekend in McCall, Idaho.