Tina Johnson holds up an illustration of improvements planned for the shrine at St. Thomas Cemetery in Coeur d'Alene on Tuesday.
BILL BULEY/Press

A person walks their dog through St. Thomas Cemetery on Tuesday.

A statue at St. Thomas Cemetery.

New signs with QR codes guide visitors to the burial sites of their loved ones at St. Thomas Cemetery.

COEUR d’ALENE — In years past, when Tina Johnson walked through St. Thomas Cemetery, she picked up branches, litter and other debris that didn’t belong.

She loved these sacred grounds settled between Mullan and Sherman avenues on the east end of Coeur d’Alene, and she didn’t believe it was receiving the care it deserved.

She had a thought.

“I wonder if there is a cemetery committee?"

Johnson learned there was not.

In July, she helped form one at St. Thomas the Apostle Catholic Church, where she is a member.

Today, eight people belong to that committee and what they’ve done in a short time has breathed new life into this 3-acre cemetery where 3,042 people are at rest and towering trees stand guard.

“Let’s see if we can spruce this up a little bit,” she said Tuesday morning as she stood under the cover of the cemetery shrine, which depicts Jesus Christ on the cross.

What they’ve done already is raise about $70,000 that paid for new black steel fencing to replace the old cyclone one. They installed four signs with QR codes that make it easier for people to find their loved ones.

“If you know someone is buried here, this will tell you where to find them,” she said.

They painted the shed, removed old, deteriorating statues of Mary and repainted the niche lettering in the shrine.

There's more to come at the cemetery, which still has available 35 full burial sites, 35 double cremation sites and 100 niches available.

Next on the list is restoring the shrine, built in 1991, for its 30th anniversary this year.

“When it was built, they used every different building material known to man,” Johnson said, chuckling. “We’re wanting to calm it down and update it.”

• Regrout and paint the rock wall

• Seal and resurface the floor

• Remove the bench and replace it with seven solid granite seats

• Original artwork for the altar

Boise artist Cindi Duft has been commissioned for the project scheduled to begin in mid-March and be completed this summer. It is expected to “transform it into a more beautiful space for reflection and Mass.”

“This is what it’s going to look like," she said, pulling out an illustration and holding it up.

The two new granite statues, one of Jesus Christ and one of Mary, will be 7-feet tall base to top and placed opposite each other on a path that cuts through the cemetery. They will be put in once spring settles in and the ground firms up.

A Memorial Day observance will be held at St. Thomas Cemetery, where the earliest burial was in 1890. A Civil War veteran, Frank Genett, born in 1812, died in 1910 and is buried there.

A third planned statue portrays Jesus in the tomb, getting ready to leave his shroud behind. If $17,000 can be raised, it will go above the St. Thomas Cemetery sign on Sherman Avenue.

As she walked away Tuesday, Johnson recounted a story about the January windstorm that snapped off the top of a tree that crashed down in an empty spot between sections of the new fence. She smiled as she said the fence would have been completed, and thus damaged, but for a miscount on how many sections were needed.

“The sections were not up where the tree fell,” she said. “It did not touch the fence.”

And while large branches and a tree came down, not a single headstone was damaged, kind of “miraculous.”

Johnson, in charge of funeral and cemetery services, said St. Thomas is an unknown cemetery to many, one that doesn’t receive much attention, but is peaceful and beautiful. Many walk through there, day and night, and some pause for prayer.

“There is history here, this is our heritage,” she said. “We can’t forget this.”

Cemetery tours can be arranged.

New signs with QR codes guide visitors to the burial sites of their loved ones at St. Thomas Cemetery. 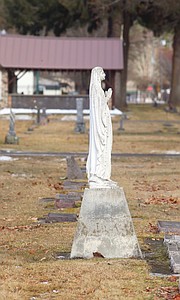 A statue at St. Thomas Cemetery.

A person walks their dog through St. Thomas Cemetery on Tuesday.