CLARK FORK — Clark Fork girls basketball stormed out of the gates Tuesday night against Wallace. Unfortunately, the Lady Cats didn't have the numbers to keep up with the Miners in the second half as they fell 62-23.

Head coach Jordan Adams said she told her team before the game if they came out strong against Wallace, she would give them Friday's practice off. The Lady Cats used that extra motivation to take a 9-7 first-quarter lead.

"I am beyond pumped for how well my girls did tonight," Adams said. "It was phenomenal basketball. I loved watching it, everybody was excited and they were having a good time."

Clark Fork trailed by 10 points at the half, but in the final 16 minutes the Miners outscored them 38-9.

"It really comes down to our depth," Adams said. "We have eight girls and by the second part of the third quarter and the fourth quarter, we were wore out, and that's one of those things where it does not matter how much we run, they have more people than us, they can keep rotating. We're never going to be able to keep up with that fuel in the tank."

Adams said her inexperienced players are really starting to pick things up.

"It's just really cool to see how much they have grown together this season," she said, "and the fact that they were able to keep up with a school as big as Wallace for the first two and half quarters, yeah I'm excited." 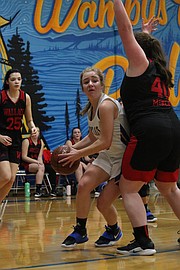 Katelyn Matteson looks to shoot during Tuesday's game against Wallace.

Freshman Lily Reuter (right) dribbles the ball up the court on Tuesday.

Junior Katelyn Matteson looks to attack the paint on Tuesday.