Alexa Tuinstra carded a 96 to place first in girls 15 and under gross. Audrey Sheffler (97) was second and Demi Driggs (108) took third.

Taylor Mire secured second in girls 15 and under net. Tuinstra, Driggs and Mire will all be freshmen at SHS this fall.

Tuinstra and Driggs were paired with Timothy Morton, the head golf pro at The Highlands Golf Course. They finished in a three-way tie for second, one stroke behind the first-place team.

Jacob Gove played alongside his dad and former PGA Tour member, Jeff Gove, and Samuels while representing The Idaho Club. The trio earned fifth as a team.

Aexel's team also finished in a tie for 13th. He was paired with David Currie from The Idaho Club and Brodyn Compton from Post Falls.

The Bulldogs have been hitting the course throughout the summer as they prepare to defend a pair of regional titles and their first state title on the girls side next spring. 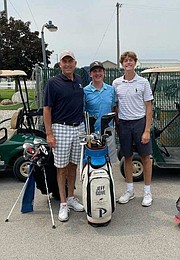