A photo of the U.S. and Hawaiian flags taken by A.C. Woolnough during a previous trip to Hawaii.

A photo of a palm tree taken by A.C. Woolnough during a previous trip.

Who, in their right mind, would travel for two days to get to Hawaii only to spend 20 hours there? Don’t forget to add a third travel day coming home — for 20 hours in Hawaii? That would be nuts. Why would someone do that? Why especially would someone with Parkinson’s disease subject themselves to the discomfort of a middle seat knowing that sitting for hours is likely to lead to muscle cramps and other issues (related to the need to frequently pee)? Factor in the restrictive travel/COVID-19 measures Hawaii has instituted and you are totally talking macadamia (nuts, get it?).

The answer is, like so much of life, both simple and complicated. To fully understand, it helps to know a little about the pluses and minuses of having a son who flies for a major airline. Many people think, “How cool. You get to fly free.” Unfortunately, that isn’t always the case. Robert Heinlein (one of the best science fiction writers of all time) popularized the acronym TANSTAAFL: There ain’t no such thing as a free lunch. Yes, if there is an open seat on a flight, I fly free. On the other hand, that pretty much blacks out much of the year — especially around holidays and other peak times. Also, if there are connecting flights, there is always the chance of being bumped and ending up stuck in a strange city for an indeterminate period. That might necessitate buying a full-fare ticket with real money. You may also have the privilege of sitting in SEA (Seattle-Tacoma International Airport) watching six flights to my destination go out full. Of course, I get rolled over to the next flight, and the next one and on and on. I get to experience the anxiety of watching the video display as my priority number on the standby list sinks further and further into the abyss. Finally, I’ve learned to list myself for the least desirable flights — the ones that leave at 5:15 a.m. (having to get up before 3 a.m.) or the red-eye or the 18-hour flight with three connections.

But I’m not complaining. I love to fly (some of my readers know that I was a single engine pilot and a glider flight instructor). I even like hanging out at airports. Where else can I observe such a diverse slice of humanity — mean, short-tempered people, kind helpers, those that pay it forward, the excitement and innocence of youth, and people of different colors, languages, and cultures — in such a concentrated setting? If desired, I can interact with some incredible and amazing people … or sit quietly and work a crossword.

Over the past decade, I have had the opportunity to fly with my son on three occasions. When he flew twin-engine turboprops for a regional airline, one trip was planned and one a coincidence. My most memorable flight was his inaugural flight as a first officer (co-pilot) flying “heavy metal” (a Boeing 737) for a major airline. All of these were relatively short flights.

What does any of this have to do with Parkinson’s? Quite a bit, actually. Like many families, our kids (four sons) and their families are scattered all over the country. We don’t get to see them nearly as much as we’d like. COVID-19 pretty much negated in person visits for almost 18 months. Any chance to visit or see each other becomes a priority. While talking with our pilot son, he mentioned an upcoming overnight flight to Ellison Onizuka (one of the astronauts killed in the Challenger disaster) Kona International Airport (KOA). That’s all it took for me to start looking for flights (with open seats!) and getting listed as a standby passenger.

This opportunity to spend 20 hours in Hawaii is a wonderful combination of travel, long-distance flying and most important, spending time with my son. But that could apply to anybody and everybody. What’s it got to do with Parkinson’s?

The experience of standby flying is an apt analogy for Parkinson’s disease. There are many negatives, drawbacks, obstacles, downsides, and difficulties with both. Conversely, there are benefits, rewards, perks, and pluses possible as well. Flying standby can literally open up the world. Parkinson’s has enriched my world through friendships and a renewed appreciation of family. That is why I’m going to Hawaii for 20 hours.

How was the trip? I don’t know. It’s scheduled for next week. Stay tuned. I will let you know how the trip turned out in next month’s column. 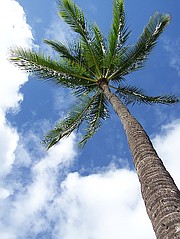 A photo of a palm tree taken by A.C. Woolnough during a previous trip. 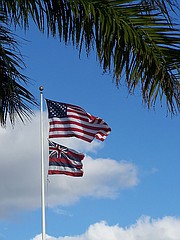 A photo of the U.S. and Hawaiian flags taken by A.C. Woolnough during a previous trip to Hawaii.