Jorden Tyler slides into first base to avoid being picked off during the 16U North Idaho Lakers game against the Valley Farmers on Saturday at War Memorial Field.
(Photo by DYLAN GREENE)

Zach Leverich gets a hit on Saturday.
(Photo by DYLAN GREENE)

Coleman Inge heads back to first base on a foul ball.
(Photo by DYLAN GREENE)

Brady Newhart looks to steal a base on Saturday.
(Photo by DYLAN GREENE)

Trevor Brackett makes a throw to first base to record an out during the Border Battle Tournament on Saturday.
(Photo by DYLAN GREENE)

SANDPOINT — The class A (19U) and class B (16U) teams for the North Idaho Lakers both competed in the Border Battle Tournament this weekend.

The American Legion squads fought valiantly, but both were unable to make it past group play and into the tournament semifinals against some talented teams from Washington.

Five-team group play action started on Friday and wrapped up on Saturday. Games were played across multiple locations in the Sandpoint and Rathdrum area and the top two teams in each group advanced to the tournament semifinals on Sunday. Wood bats were used during the tournament.

The Lakers played all of their games at Pine Street Field and War Memorial Field.

Across their four contests during group play, the 19U Lakers could not breakthrough for a win.

On Friday, the Lakers faced the Dragons from Duvall, Washington and the Expos from Spokane. The team was only able to rack up five hits and one run during the two games. Everett Hannah, Avery Bocksch, Greg Belgarde, Zeke Roop and Mick Koch all recorded hits.

The Lakers fell behind 4-0 in their first game on Saturday against BA Prep from Yakima, but clawed back to pull within one run after five innings. In the fifth inning, the Lakers scored a run on a bases loaded walk and an RBI single by Mike Riley.

The team looked like they were on the cusp of their first win of the tournament, but the game was called after six innings due to time constraints.

In their final game, the Lakers fell to the Puget Sound Powerhouse.

The 16U Lakers opened the Border Battle on Friday with a thrilling 8-7 victory over a team from Ellensburg, Washington. Trailing 7-5, the Lakers scored three runs in the sixth inning to pull away for the win.

Zach Leverich went 2 for 4 with four RBIs and Jorden Tyler went 3 for 3 with two RBIs.

In their second game on the opening day, the Lakers were held to just one hit in a 9-0 loss to the Dragons from Duvall.

The Lakers opened play on Saturday with a battle against the Valley Farmers from Okanogan, Washington. The Lakers scored three runs in the fourth, but the Farmers fought back to tie the game at 3-3 in the sixth inning.

In the bottom of the seventh, the Farmers scored on a passed ball to grab a 4-3 walk-off victory.

Cole Sanroman started on the mound for the Lakers and lasted the entire game. He allowed six hits and three earned runs while striking out three. Coleman Inge, Jorden Tyler, Zach Leverich and Gavin Day all recorded hits for the Lakers.

The team wrapped up tournament play Saturday afternoon with a 5-2 loss to the Rawlings Tigers from Seattle. The game was tightly contested throughout, but a three-run first inning for the Tigers was too much for the Lakers to overcome. 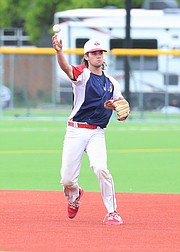 Trevor Brackett makes a throw to first base to record an out during the Border Battle Tournament on Saturday.

Brady Newhart looks to steal a base on Saturday.

Coleman Inge heads back to first base on a foul ball.

Zach Leverich gets a hit on Saturday.