Senior Christian Story gets down low to return a shot during a singles match against Post Falls on Wednesday at Travers Park.
(Photo by DYLAN GREENE)

Josh Embree chases down the ball and hits a forehand on Wednesday.
(Photo by DYLAN GREENE)

Berkeley Cox lines up her shot to hit a forehand on Wednesday.
(Photo by DYLAN GREENE)

Josh Embree prepares to hit a backhand on Wednesday.
(Photo by DYLAN GREENE)

Olivia Petruso stares down her shot on Wednesday.
(Photo by DYLAN GREENE)

Neva Reseska hits a backhand down the line on Wednesday.
(Photo by DYLAN GREENE)

The Sandpoint tennis team huddles up prior to Wednesday's match against Post Falls.
(Photo by DYLAN GREENE)

SANDPOINT — At this time of year, the Sandpoint tennis team is accustomed to traveling south for matches, whether it's Post Falls, Coeur d'Alene, Lewiston or any other team that has the ability to get outside.

But not this spring. The Bulldogs hosted their first match of the season Wednesday when they took on Post Falls at Travers Park.

In his 13 years as the head coach, Kent Anderson can't recall a time when SHS hosted a match in March.

The Bulldogs took full advantage of playing at home and dismantled the Trojans 10-2.

Families and friends surrounded the fences bordering the courts to cheer on the team and early on, Anderson could tell his team was a little nervous. But eventually, they all found their groove.

"As everyone got through the jitters and the first set, it all went the way I expected," he said. "It's pressure and you can't simulate that in practice. You've got to have matches and get used to playing under those conditions."

The Bulldogs' three boys singles players seemed to be unfazed by the friendly environment. No. 1 Josh Embree, No. 2 Christian Story and No. 3 Brahma Heitz cruised to victories in their matches. Embree won 6-1, 6-1, Story shut out his opponent 6-0, 6-0, and Heitz earned a 6-1, 6-1 win.

Anderson said Story was precise with his shots and treated the tennis court like a billiards table.

"He just goes for location," he said, "and he was moving the ball around against his opponent so well that his opponent, if he got to a ball, he wasn't going to get to the next one ... He just surgically destroyed him."

Embree overpowered his opponent and a victory was never in question for him, Anderson said.

Heitz moved over from the No. 1 mixed doubles pairing and made his season debut at singles, and didn't miss a beat.

"He had a really good match," Anderson said.

Junior captains Olivia Petruso and Denali Terry also teamed up for the first time this season at the No. 1 girls doubles spot. After a bit of a slow start, the duo pulled out a 6-3, 6-0 victory.

"They were in a battle the first set and then they just figured it out and loosened up," Anderson said, "and that's kind of how some of the other matches went."

Anderson moved around a couple other players in his lineup, including Adrian Doty, who won 6-3, 6-3 at the No. 3 singles slot for the girls.

"We're playing the chemistry game to see who works well together," Anderson said. "I just try to get kids in a position where they have the best chance of qualifying for state and sometimes that means not playing where they thought they were going to play."

Three players who went undefeated during matches against Lewiston and Coeur d'Alene this past Saturday, stayed that way on Wednesday.

After grabbing a pair of singles wins this last weekend, Maise Brazill teamed up with Josh Jessen at No. 1 mixed doubles and earned a 6-3, 6-0 victory.

The boys' No. 2 doubles pairing of Tyler Korn and Carter Johnson tallied their third straight win to open the season, 7-5, 7-5.

Freshman Neva Reseska found herself in a battle at No. 1 singles with Emily Schlothauer from Post Falls. Ultimately, she prevailed 7-5, 6-1 to secure her first career varsity win.

Aden Heitz and Patch Howard won 6-3, 6-0 at No. 2 mixed doubles, and sophomore Maile Evans and freshman Berkeley Cox played in the only match that went to a third-set tiebreaker at No. 2 girls doubles.

"They were playing the way I thought they should have played the whole match," Anderson said about the pair's final two sets. "They were closing on the net, volleying hard and it was just like, 'Here we go.' I think that they made a quantum leap at the end of that match and I think that's going to carry forward for the next several matches. I was very happy with those two."

The only match Sandpoint lost on the court was at No. 1 boys doubles where Charlie Johnson and Tyler McNamee fell.

The other match the Bulldogs lost came by default at No. 2 singles on the girls side. However, Terry still played a singles match against Claire Holding from Post Falls that didn't count toward the final score, and won the back-and-forth battle 6-4, 7-6.

The Bulldogs open play at the Lewiston Invitational at 10:30 a.m. Friday. Semifinals and finals for the tournament will be contested on Saturday. 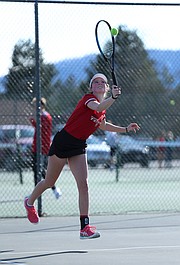 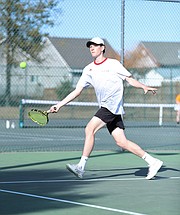 Josh Embree chases down the ball and hits a forehand on Wednesday. 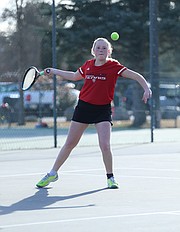 Berkeley Cox lines up her shot to hit a forehand on Wednesday. 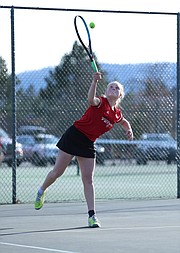 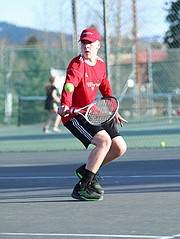 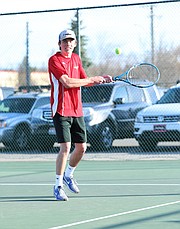 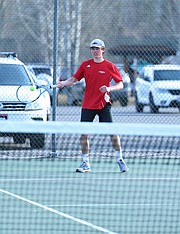 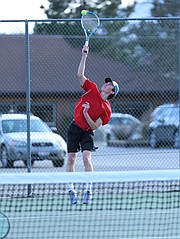 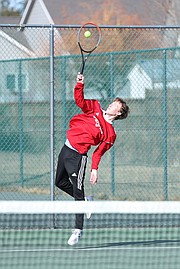 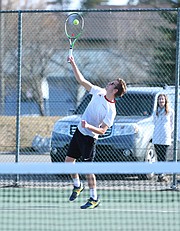 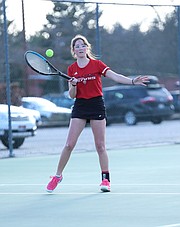 Denali Terry returns a shot during singles play on Wednesday.

Denali Terry moves forward to attack the net on Wednesday. 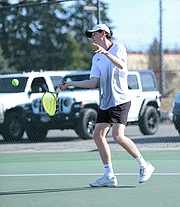 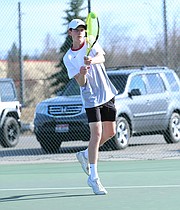 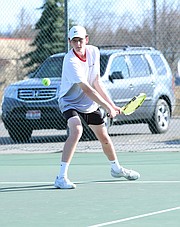 Josh Embree prepares to hit a backhand on Wednesday. 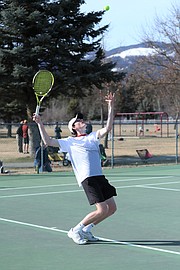 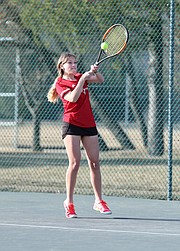 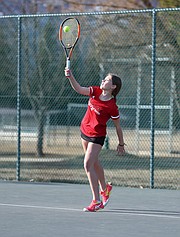 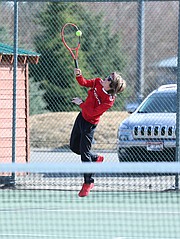 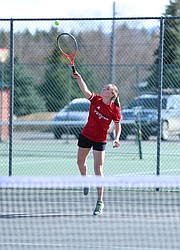 Olivia Petruso stares down her shot on Wednesday. 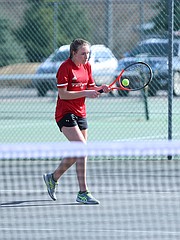 Neva Reseska hits a backhand down the line on Wednesday. 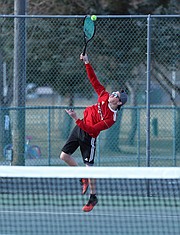 The Sandpoint tennis team huddles up prior to Wednesday's match against Post Falls.