Fellow travelers in the Scotchmans never fail to inspire

Don Otis, pictured during a winter hike on Scotchman Peak, is Sandpoint local who has hiked Scotchman Peak 47 times - including 11 times this year.
(Courtesy photo)

I grew up in Los Angeles, surrounded by asphalt, noise and a few people. My Mom will tell you that when I was a kid, I would beg and plead with her to drop me and my adventure-seeking friends at the base of a canyon somewhere. Canteens safely stuffed away, we would make our way up some high point and marvel. There is a reason Joni Mitchell sang, “They paved paradise and put up a parking lot … you don’t know what you’ve got till it’s gone.”

My escape was always to the mountains – any mountains. Since then, I have climbed in Europe, Asia, Mexico, Canada, and throughout the U.S. Those of us who live in North Idaho are blessed with the confluence of two relatively small but impressive ranges – the Selkirk and the Cabinet Mountains. Lake Pend Oreille splits these two ranges leaving us with granite monoliths on both sides surrounded by forest and streams and filled with creatures and flowers that delight the soul.

The pandemic sent people outward bound. The angst and uncertainty left us yearning for the high places, searching for respite, longing for a taste of beauty unspoiled by spin or disease. We discovered that our own little sanctuary in the wildness remained largely unsullied; just waiting for pilgrims to enjoy the same beauty we have here.

Scotchman Peak in the Cabinet Mountains may not be the highest summit, but at 7,009 feet it has the ingredients that make it a worthy challenge. According to Tom Lopez, the author of Idaho: A Climbing Guide, it is probably the hardest class 1 (non-technical) peak in the state. If you have visited the airy summit ridge, you know why Friends of Scotchman Peaks Wilderness want to preserve this area as a wilderness escape – keeping it accessible but pristine.

Since 2015, I have made forty-seven trips to the summit. That’s nearly 400 miles on one peak and trail. Why would anyone do that? The answer is simple; the challenge of a tough trail ends with some of the most spectacular views found anywhere in the world. There are goats in the summer, snowghosts in the winter resembling creatures from a science fiction movie, and plentiful flowers in late spring.

The people I meet along the path are all shapes and sizes with stories that inspire. A few weeks ago, I met Ed. He told me Scotchman was on his bucket list as he neared his 80th birthday. Then I met ten-year old Titus who was working his way up the ridge with his Army veteran dad. Most of the people I meet are first timers hoping to catch a glimpse of a curious goat or two who wait unperturbed near the top. I am not alone in my multi-summit fever. My wife, my friends, my son, Landon who has also been up ten times this year himself, are part of a growing cadre of Scotchman Peak enthusiasts.

“We need adventure,” said Royal Robbins. “It’s in our blood. It will not go away.” We also need challenge. We need goals. Most of all we need an objective we can focus on. Scotchman Peak is just such an adventure.

Don Otis is an avid outdoorsman living in the Sandpoint area. He has lived on three continents, climbed the Matterhorn in the Pennine Alps, scrambled up the Great Pyramid of Giza, and climbed all 66 of the 14,000-foot peaks in the lower 48 states. Still, he believes that the views from the summit of Scotchman Peak are some of the most spectacular views found anywhere in the world. He has summited Scotchman Peak 47 times since 2015. 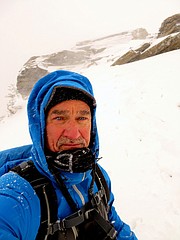