Marilyn Schaedel Chambers passed away on Friday, November 12, 2021 in Sandpoint, Idaho. She was 89 years old.

Memorial services will be held at 11 a.m. on Friday, January 14, 2022, at the Gardenia Center in Sandpoint.

Marilyn was born on July 30, 1932, in Maplewood, New Jersey, to William and Dorothy Schaedel. She graduated high school in Hackettstown, New Jersey, before moving to New York City to work as a fashion model.

After a few years, she moved to the Bahamas and gained employment at the British Colonial Hotel where she taught swimming, water skiing, snorkeling, and scuba diving.

Marilyn married William Chambers in Ft. Lauderdale, Florida, where they made their home for 20 years by running a small hotel. William would also provide tours in his glass-bottom boat to guests, while Marilyn swam underneath as the “mermaid,” pointing out sea life and coral below.

In 1974, Marilyn and William moved their five children to North Idaho and began their family legacy at Burning Tree Ranch in the Selle Valley. It was on the ranch that Marilyn’s daily chores of gardening, milking cows, and working her horses grew into lifelong passions. She became active in the Bonner County Fair, P.E.O., Cattlemen’s Association, and taught meditation and yoga at the Grange Hall — personal practices that continued on for the rest of her life.

In 1989, Marilyn opened the Gardenia Center, a non-denominational community space for people to come together and worship. She devoted her life to her spiritual journey, and it was her dream to create a place that both served and welcomed everyone. She fulfilled that dream when the Gardenia Center opened its doors, and its community resources such as the soup kitchen on Wednesdays are now well known.

In 2002, Marilyn was honored as a Woman of Wisdom for her leadership and years of community service in Bonner County.

Marilyn loved her horses, the ocean, the Bahamas, painting, baking, and reading theology. She was a storyteller, and even a published author of a children’s book. Mostly, she enjoyed spending time with family. She emanated a life of love.

She is preceded in death by her husband, William, who passed in 1993. 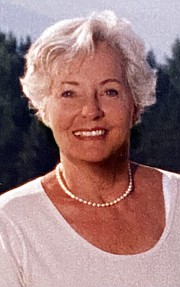