Evan Darling rises up to try and head the ball during Tuesday's match.
(Photo courtesy of JASON DUCHOW PHOTOGRAPHY)

Eoin Eddy sends the ball toward the net during Tuesday's match against Post Falls.
(Photo courtesy of JASON DUCHOW PHOTOGRAPHY)

The Bulldogs had the Trojans on their heels from the opening kick and earned a 1-0 Inland Empire League victory at War Memorial Field.

Head coach Tanner French saw his team take a big step forward in a loss at 5A powerhouse Lake City on Friday, and they built off that performance against the Trojans.

"Overall, that's the best we've passed all year," he said. "It was fun to watch."

Sandpoint generated countless scoring chances, particularly in the second half. The Bulldogs collected 12 shots in the final 40 minutes and kept the ball on the Trojans' side of the field nearly the entire time.

French has been asking his squad to play with more urgency all season — he saw that Tuesday.

"The urgency was there, now it's just the final touches, pun intended," he said. "The runs that need to be made are not being made right now, but that doesn't mean that they can't be in the future. We haven't spent a lot of time in training as far as those goal-scoring runs."

The Bulldogs high-pressed for a significant portion of Tuesday's match, and when they weren't, they sat back and forced Post Falls to turn the ball over.

"It's frustrating to win a game one-nil, but a win is a win," French said.

That win was almost taken away in the closing moments. In stoppage time, Andon Brandt from Post Falls broke through the Sandpoint defense and got a good look at net, but junior goalkeeper Roman Jiles came up with a huge save to preserve the victory. It was the Trojans only shot on net in the second half and Jiles only save in the entire match.

French said he kind of turned away when the shot looked like it was going far post, but Jiles made sure it didn't get past him.

"We've been working on his footwork and that's been a massive improvement," French said about Jiles. "He's playing at the top of his capabilities and I know that he's got more, and the team is behind him the whole time."

The only goal of the match came in the 15th minute. Keyan Strock made a perfectly-timed run and Nolan Angell fired a pass to him from just past midfield. Strock picked up the ball just outside the penalty box, dribbled toward the goalie and blasted a shot off the top of the crossbar and into the back of the net.

"I had the exact same style goal in the state final," he said, "and I don't know why but when it hits the crossbar and goes straight down and comes straight back up, it just makes that goal that much sweeter."

Strock has now scored three goals over the past week for the Bulldogs.

"Keyan is finding the right spot to be in and you can't ask for much more," French said. "I hope someone got that goal on film."

In the second half, Henry Barnes had a chance to score on a turnover by the Trojans, Randy Lane nearly sent one past the keeper on a cross from Aidan Smith and Eoin Eddy came inches away from heading in a cross from Jett Longanecker. It was evident how badly the Bulldogs wanted another goal, it just wasn't meant to be.

"I think they enjoyed it tonight, we just need that one guy who puts his head down and puts the ball into the back of the net," French said.

Sandpoint (4-3, 3-2 IEL) will celebrate Senior Night when they host Lewiston next Tuesday.

Eoin Eddy sends the ball toward the net during Tuesday's match against Post Falls. 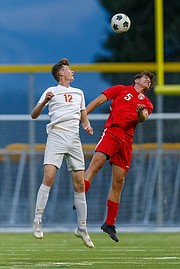 Evan Darling rises up to try and head the ball during Tuesday's match.