COEUR d’ALENE — Two longtime North Idaho College trustees say they’re walking away from the institution in order to save it.

Trustees Christie Wood and Ken Howard announced Friday their resignation from the NIC board of trustees, effective May 3.

Their exit will leave just two trustees, Todd Banducci and Greg McKenzie. The NIC board will be unable to function without a quorum.

The Idaho State Board of Education is empowered by statute to appoint trustees to fill the vacant positions.

The appointees will serve until the next trustee election in November.

In an email to the college community, Interim President Michael Sebaaly said he will work with the trustees and the State Board of Education on the next steps.

“This was clearly unexpected,” he wrote.

Wood was first elected to the board in 2004, while Howard has served since 2010.

Since then, Wood and Howard frequently clashed with the board’s majority, led by Banducci.

In an open letter to the North Idaho College community, Howard and Wood said they believe they’ve done all they can to resolve the existing problems with board leadership, specifically Banducci.

Read the full letter at cdapress.com.

“We’re at an impasse with the other trustees,” Wood told The Press on Friday. “We’re not able to get back to the mission. This is the only option.”

That mission, she said, is to save NIC from the possibility of losing accreditation.

The Northwest Commission on Colleges and Universities — NIC’s accrediting organization — sanctioned the college with a warning last week, citing persistent issues specifically related to the board of trustees.

The NWCCU requires NIC to take appropriate action to ensure its recommendations are resolved over the next year. That includes adding a fifth trustee to meet the minimum requirement of five trustees.

NIC’s board has been deadlocked in 2-2 votes since January, when Barnes resigned from his Zone 5 seat. Barnes stepped down amid concerns he had established legal residency in South Dakota and was no longer eligible to serve on the board.

Unable to muster more than two votes for any of 10 trustee candidates interviewed at a special meeting Wednesday night, the board failed to select a fifth trustee to fill the Zone 5 vacancy.

Now the matter is in the hands of the State Board of Education.

Idaho State Board of Education Executive Director Matt Freeman said Friday that the board will soon release an announcement seeking applications from residents of each of the three trustees zones.

The board will reportedly look to the process used to create the inaugural board of trustees at the College of Eastern Idaho in 2017.

In that search, an ad-hoc committee comprised of three board members evaluated candidates and made recommendations to the full board, which then approved appointments for each trustee zone.

The NWCCU also recommends that NIC appoint a permanent president and rebuild its administrative and academic leadership team.

In a 3-2 vote last September, the board fired former President Rick MacLennan without cause.

The next month, MacLennan filed a wrongful termination lawsuit, alleging he was fired in retaliation for accusing Banducci of aggressive, unprofessional and threatening behavior. He also named Trustees McKenzie and Barnes in the suit.

He received almost $500,000 as part of a settlement over his firing.

Interim President Michael Sebaaly was NIC’s head wrestling coach before the board of trustees selected him to lead the college temporarily. The vote was 3-2, with Wood and Howard opposing Sebaaly’s appointment.

“He needs to be replaced,” Howard said Friday. “Not in November, but now.”

The qualifications of the interim president position came under scrutiny last October.

None of the candidates for the position were interviewed, including Sebaaly.

Since his appointment, Wood said Sebaaly has struggled to earn the respect of faculty and staff.

“I can’t blame him for not having the background,” Wood said. “I blame (Banducci, McKenzie and Barnes) for setting him up for failure.”

She said she’s encouraged Sebaaly to put himself forward as a candidate for permanent president and show that he can be selected after going through the “right” process.

“He needs to prove it to himself and to the campus,” she said.

Howard said he believes morale among faculty and staff would improve if Sebaaly is replaced.

“I hope that whoever replaces us will immediately thank and dismiss him from his current role,” Howard said.

He added that he also hopes the three trustees appointed by the State Board of Education have “the courage” to remove Banducci as board chair and from his role as co-chair of the presidential search committee.

“What’s happening to NIC is a tragedy,” Howard said. “The people who are caught in the middle are the faculty, staff, students and people who love this institution.”

After 18 years serving the college as a trustee, Wood said it pains her to resign.

But she believes stepping down to make way for new trustees is the only way to get NIC back on course. 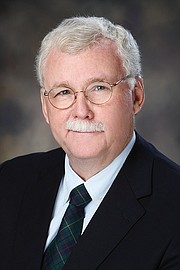