Emergency Services purchased $88,000 in Laryngoscopes in October. The devices are used to help medical workers with g-tube insertion. The laryngoscopes pictured are equipped with a camera on the end that is inserted into a person's body, which aids in successful intubation.

SANDPOINT — Nearly $3 million of mostly county money was delegated to many important county services at this week’s Board of County commissioners meeting. A total of $2,991,314.45 was allocated toward road maintenance and safety improvements, an ambulance, an excavator, and other contracts and acquisitions within the county.

The meeting kicked off with accolades from the Local Highway Technical Assistance Council. The four men who participated took over 80 hours of training in safety, maintenance, and roadway construction. John Kemp received both certifications from LHTAC, earning the titles of Road Scholar and Road Master. Kevin Stockton, James Ennis, and Matt Tolbert also earned the Road Master certification. All four received an inscribed Carhartt jacket along with other mementos to celebrate their achievements.

“We don’t want just bodies in seats,” said Laila Krel for LHTAC. “The goal for them is to be learning something, gathering something from the class, and bringing it back to the county.”

Training courses can be taken by both county employees and members of the community. Registration for spring classes is currently open. More information about courses and education objectives can be found on LHTAC’s website at lhtac.org/training/roadscholar.

“We’ve always been big supporters of the program,” said Commission Chairman Dan McDonald. “The better educated our people are, the more proficient they are going to be, and the safer they are going to be. … These kind of programs are essential to the county and I think we have the best road and bridge department in all of North Idaho and maybe the state — and you can tell that to even Ada County.”

The meeting commenced with approving the consent agenda which consisted of four minor land divisions and 11 invoices over $5,000. Four of those invoices came from the Road & Bridge Department; two of them totaling $24,000 on a street sweeper rental and brushes, $8,985 on Geographic Information System services, and $12,000 for bulk geotextile fabric.

An invoice of $88,000 came from Emergency Medical Services for laryngoscopes. A laryngoscope is a tool used by medical workers to assist in intubating a person, typically in life threatening situations. The laryngoscopes purchased by EMS are needed by their staff to provide better life-saving medical services to people in the county. The new laryngoscopes are equipped with a camera on the end that goes into a person’s body, which gives medical workers visual confirmation that they are not injuring the individual they are intubating.

The medical equipment was purchased by EMS Director Jeff Lindsay in October using American Rescue Plan Act funding. But because of the county’s ongoing litigation surrounding the coronavirus relief funds, EMS was made to return the money to the county’s ARPA fund and pay for the supplies using the department’s budget.

The remaining six invoices in the consent agenda came from the Bonner County Sheriff’s Office; $7,600 for animal control, $14,000 for the Idaho State Police, and $26,645 in confidential purchases.

One resident urged the commission to not approve the confidential items for the sheriff’s office on the grounds that tax spending should be known to the public.

“I believe that if the sheriff is asking for money, he needs to explain what that money is for, it cannot be confidential. He’s spending taxpayer money, we should not be giving the sheriff money without knowing what it’s for,” said Jim Leighty. “There's a lot of room for abuse for that.”

Commissioners explained that the purchases are not confidential to the board, but said sharing the information could create a security issue. Bill Wilson, deputy prosecutor, and legal advisor for the commission, said the county is allowed to exempt certain public records..

“One of them are these IT security-sensitive contracts and purchases that we choose not to disclose under that exception because we do not want to risk our IT infrastructure,” he said.

The explanation was not good enough for Leighty.

“First, going by ‘this is how we’ve always done it’ is not unacceptable. We don’t do that. Second, you have a right to not disclose certain information. But you cannot keep all information confidential, you’re going to have to explain a little bit of it,” Leighty said. “It’s public money. The sheriff should not get money unless the public knows what he is spending their money on.”

McDonald responded by sharing some of the information disclosed to the commission.

“I won't tell you the name of the vendor, but I will tell you what it is,” McDonald said to Leighty. “$8,700 is for flex remote migration. The $12,345 is electrical engineering services. And the $5,600 is software subscription renewal.”

Wilson then elaborated on the legal procedure regarding the county’s confidentiality decisions.

“Reasonable minds can disagree as to how we interpret what is appropriate to withhold and what is not,” Wilson told Leighy. “This has been vetted by the prosecutor's office, me and others, and we approve it. If you disagree with that or think that we’re doing it incorrectly, you’re free to file an open meeting violation.”

“Remember, it is taxpayer money. And even if it’s vetted by your office doesn’t mean that we have to trust you either. We do have some things you owe to us and I just want to make that clear.”

Commissioners approved the consent agenda before moving on to the main agenda.

The Clerk’s Office asked commissioners to approve $881,097.36 in claims and demands batch spending for the county and for emergency medical services. These are routine expenditures that ensure basic services are reliably funded within the county. The commission approved.

Emergency services brought two resolutions before the commission, the first requesting the commission to approve moving $176,700 from last year’s EMS budget to this year’s budget. Funds will be used to pay for a remounted ambulance the department ordered last year.

The second resolution sought the commission's approval in creating a new records retention schedule. Record retention policies mandate how long physical copies of documents need to be held in storage, as opposed to being immediately discarded. Digital copies of information count as record storage in some, but not all, circumstances.

Commissioners approved and signed both resolutions.

Road & Bridge took up a large portion of Tuesday’s agenda by bringing six items before commissioners. The first was a hold harmless agreement between the county and Idaho Asphalt Supply Inc. A hold harmless agreement protects businesses in case anyone is injured while on the premises. Road & Bridge Director Jason Topp explained that county employees frequently visit the business site, making the agreement necessary for both the county and Idaho Asphalt Supply.

The second item requested the commission's approval to enter into a “piggyback” purchase of a 2021 Caterpillar 323 Tract Hydraulic Excavator. The excavator is currently for sale by Western States Caterpillar for $249,987.40. Funds to purchase the excavator will come from the department’s heavy equipment budget. Topp explained the details of the purchase agreement with the commission.

“A piggyback is where another purchase was made in the state that the county can actually just piggyback off of. So we can follow that purchase without having to go through the whole bidding process,” Topp said.

“It allows us to not go through the competitive bidding process because we are confident that this organization has actually done this on a nationwide scale and have been able to get the best price,” Wilson said.

“I sometimes get anxiety that we aren’t getting the best price,” said Commissioner Jeff Connolly. “I had Bob look into bids from both John Deere and Volvo. We did that, and [Western States] was by far the best price.”

The third item sought the commission’s approval to purchase culvert supplies in bulk from Consolidated Supply Inc. for $51,729.37. The department compared quotes from six different agencies before presenting the contract before the commission.

“This is a 61% increase in prices from last year’s unit price for culverts due to the rise in steel. Once again, we find ourself in excess for what we had budgeted and reducing these qualities down to meet our budget.” said Matt Mulder, a staff engineer for the department.

The remaining three items were for the county’s 2022 rock crushing contracts. Three contracts totaling $1,396,115 were awarded to Wood’s Crushing and Hauling Inc. and Peak Sand and Gravel — the Sandpoint based businesses were the only two bidders in all three districts.

Commissioners approved all six items, totaling $1,697,831.77 in expenditures to improve the county’s infrastructure.

The Airport gained permission from the commission to receive $54,455.32 in grant funding from the Federal Aviation Administration’s Airport Improvement Program. Funds will be paid to Northwest Grading to relocate 600 feet of N. Boyer Ave. near the airport. According to information from Dave Schuck for the Airport, the Boyer Road Relocation Project will move the 600-foot section of road south of the roundabout that shares a border with the airport. The portion of N. Boyer Ave. is too close to the runway and needs to be moved so it is outside of the object-free area.

Commissioners approved the airport to receive the FAA grant funding.

Solid Waste brought one item before the commission asking for permission to receive class-action lawsuit settlement money from Fiat Chrysler Automobiles. Although the exact total remains unknown at this time, the company faced a class-action lawsuit over a recall of their 2014-2019 Ram EcoDiesel Trucks. The recall was put into place due to a defect causing some vehicles’ engines to explode. Solid Waste qualified for the settlement because of the department’s ownership of a 2015 Dodge Ram 1500 EcoDiesel truck.

The commissioners approved the department’s request to receive the settlement funds.

Shortly after, McDonald recessed the meeting before reconvening for executive session where four items were discussed. Human Resources brought two items before the commission, one regarding hiring, the second regarding personnel. The Prosecutor’s Office discussed exempt records with the commission. Finally, the commission held a discussion regarding litigation the county is involved in.

The Board of County Commissioners hold public meetings every Tuesday at 9 a.m. in the administrative building at 1500 U.S. 2. Those interested in remotely attending can do so via Zoom; or by watching the livestream of the meeting on Bonner County’s YouTube page, where an archive of previous meetings can be viewed. 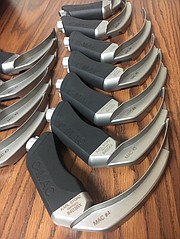 Emergency Services purchased $88,000 in Laryngoscopes in October. The devices are used to help medical workers with g-tube insertion. The laryngoscopes pictured are equipped with a camera on the end that is inserted into a person's body, which aids in successful intubation. 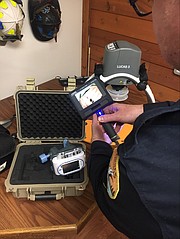