Governor Brad Little signed a bill Thursday offering hazard pay to Idaho wildland firefighters equal to 25% of their hourly rate when they are working on an uncontrolled fire or at an active fire helibase.
(Photo courtesy Idaho Department of Lands)

A firefighter works on the Pioneer Fire in Priest River in July. A bill approved by the Idaho House of Representatives on Friday would offer hazard pay to Idaho wildland firefighters if the legislation becomes law. Photo courtesy of the Idaho Department of Lands

The Idaho House approved a bill offering hazard pay to Idaho wildland firefighters on Friday by a 49-19 margin.

If the legislation becomes law, Idaho wildland firefighters will receive hazard differential pay equal to 25% of their hourly rate when they're working on an uncontrolled fire or at an active fire helibase.

“What this does is it recognizes that wildland firefighting is a very dangerous profession,” said the Fire Management Chief for the Department of Lands (IDL) in Coeur d’Alene, Josh Harvey. “There’s all sorts of things in that wildland fire environment that can kill an individual or seriously injure them.”

Harvey, a born and raised Idahoan, has been a wildland firefighter since graduating high school. He has spent much time working shoulder to shoulder with interagency partners. He's also been in charge of other federal or state firefighters who, while doing the same job, were compensated at a higher rate because they received hazard pay.

Washington Department of Natural Resources wildland firefighters receive a starting salary of $2,892 a month, around $18.75 per hour. They receive an additional $2 per hour for emergency response duties.

Idaho’s IDL wildland firefighters start at $12.55 per hour. Their hourly rate is lower than some fast food workers.

Firefighters work a base of 40 hours a week but are expected to be available to respond to a call anytime, any day of the week in fire danger season. They also can be sent to help in other states, away for over two weeks at a time.

Upon reaching a dangerous scene, there’s potential a firefighter could work 24 or more hours straight if there's no one to relieve them.

Harvey said he has been part of multiple medical evacuation situations.

“They can be life threatening,” Harvey said. “The injuries themselves have long-term impacts.”

Harvey said he has friends who have received significant spinal damage from falling branches. Others have died on the job.

“I think this hazard pay is really a recognition of men and women putting themselves in a position to do a job for the greater good of the public,” he said.

For the agency, Harvey said offering hazard pay is critical to retain some of the employees who get lured away by other agencies offering a higher rate of pay.

Historically, Harvey said, where they’ve seen the most struggle to keep employees is in leadership positions. After just two seasons, 40% of IDL wildland firefighters do not return to work for the agency.

“We put the initial investment in training them and giving them the first couple years of experience, and then they go,” Harvey said. “You kind of have to go where the money is.”

“I think the long-term investment in our firefighters is really going to pay off in our ability to provide quality fire protection to the taxpayers of Idaho,” Harvey said.

In a recent survey, 60% of IDL’s wildland firefighters who indicated they would not return to work for the agency in the next season said that if hazard pay was provided, they would stay on with IDL.

Scott Phillips, Policy and Communications chief for IDL, estimated between about $330,000 and $390,000 in hazard pay could be expected to be paid out each year from the general fund.

Phillips said there's not an additional fee or tax being created. He said the department recognizes that the state has a budget and has to be careful with how tax dollars are spent, placing some restrictions on how hazard pay is delivered to control costs.

After House approval, the bill now goes to the Senate for consideration.

HB588 is a companion bill to another legislative endeavor considered during the current session. IDL is working with Idaho’s Joint Finance-Appropriations Committee to create a path to permanently increase firefighter wages to $15 an hour.

IDL is already increasing starting pay to $15 an hour this season, using funds from its existing budget, but the base budget isn’t sufficient to support the hourly rate increase. The 2023 budget request includes a decision to make the increase permanent. 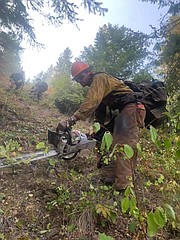 A firefighter works on the Pioneer Fire in Priest River in July. A bill approved by the Idaho House of Representatives on Friday would offer hazard pay to Idaho wildland firefighters if the legislation becomes law. Photo courtesy of the Idaho Department of Lands