Emergency Services Director Jeff Lindsey demonstrates the life-saving capabilities of equipment purchased by the department using American Rescue Plan Act funding. Lindsey was prepared to show the equipment during the commissioner's meeting, but was unable to because of time constraints.

SANDPOINT — A clash over American Rescue Plan Act funding came to a head at Tuesday’s commissioner’s meeting, causing a resolution over spending the funds to be tabled for one week.

The debate over spending the funding came to a head after a packed room insisted the county should not accept or spend federal money, especially COVID-19 relief funds. Residents expressed deep concerns for potential mandates that could be imposed by the federal government if money coming from ARPA is spent.

The discussion was allowed to be on the agenda because of a resolution on ARPA funding authored by Commissioner Steve Bradshaw in January.

The resolution stipulates that the county shall not spend ARPA funding until it is assured that retroactive conditions will not be able to be imposed, like vaccine mandates. Also stipulated was that any ARPA funds that have already been spent be returned to the ARPA account, and reimbursed by the respective departments’ budgets.

Members of the public have attended previous commissioner meetings for weeks asking for a space on the commission’s agenda to discuss the details and potential conditions attached to ARPA.

Bill Wilson, legal representation for the commissioners, presented a document from the Idaho Service Legislative Office one hour prior to the meeting regarding conditions and stipulations associated with spending the money.

The office produced the report at the request of Rep. Sage Dixon, R-Ponderay.

Wilson said that he had not had a chance to completely review the report, but that it appeared that post-acceptance mandates would not be allowed to be imposed

“A future executive order would be a post-acceptance condition,” Wilson said. “The more likely remedy for the federal government would be to claw-back money.”

Wilson further explained that the document reflected the opinion of the Idaho Attorney General, and Idaho Service Legislative Office.

After the explanation, Wilson asked for another week to review the document in detail before making a recommendation to commissioners on whether or not spending ARPA funds is advisable for Bonner County.

“This is not my office’s formal opinion yet, given that I’ve only had the chance to look at this for like, about an hour,” Wilson said.

“Sage told me this morning, the state of Idaho is the only state asking these questions. The county of Bonner is the only county asking that particular question.”

Wilson was cut off by applause from the audience.

Few got a chance to speak during the public comment portion of discussion due to the commissioners having an engagement at 10.

Jeff Lindsey, director of Emergency Services, was among those who did not have the chance to speak, despite preparing a presentation for the meeting.

Emergency Services has spent a total of $800,300 in ARPA money since October. The money was used to purchase life-saving equipment to be used in medical flights and ambulances. An automatic CPR machine, ultraviolet disinfecting equipment, and other devices were purchased using ARPA funds — all equipment that Lindsey deems necessary for the services they provide.

“EMS is more frustrated right now than anything,” Lindsey said. “We’re frustrated because we see this [ARPA funds] as such a public benefit. And when we see folks that are constantly trying to roadblock this and constantly throwing in all these conspiracies and all this stuff, we’re seeing the potential harm that it’s doing to our community.”

“It wasn’t stopping at ARPA, it was all federal dollars. These folks didn’t want any ties to anything federal. And a majority of what we do is federal. Tax dollars that the [federal government] has we’re getting back, and it’s the same for fire departments. Our levels of service would just go down tremendously.”

The commissioners will hold a vote on Bradshaw’s resolution at their Jan. 18 meeting at 9 a.m. Those interested in remotely attending can do so via Zoom or by live streaming on Bonner County’s YouTube page.

There has been next to zero public comment in favor of accepting ARPA funding at public meetings. 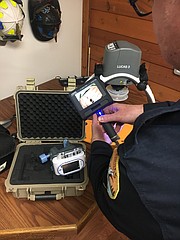