Rachels recovering after being hit by truck

If David Rachels had not been wearing a helmet, certain life saving procedures would not have been available to him during the recovery process.

Sandpoint — A Bonner County man who was struck by a vehicle in the intersection of U.S. 95 and Schweitzer Cutoff Road on March 16 is making strides in his recovery.

David Rachels, 19, is making strides in recovery at Sacred Heart Medical Center, according to updates his family is posting to an online fundraising website.

David was struck by a driver who ran a red light at the busy intersection U.S. 95 and Schweitzer Cutoff Road, blocking traffic for over two hours. The driver of the Dodge Ram pickup was uninjured, but Rachels was seriously injured.

Even though he was wearing a full-face motorcycle helmet, he sustained severe internal and external injuries. In addition to multiple broken bones, many of his internal organs were bruised or lacerated from the impact, according to information found on David’s “Give, Send, Go” page, a Christian fundraising platform similar to GoFundMe.

David was first taken by ground ambulance to Bonner General Health, where he was sedated due to the severe amount of pain he was experiencing, family members said in a post to the page. Shortly after he was flown by medical helicopter to Kootenai Health where he remained for a few hours.

After many attempts to stabilize him, David was life-flighted again, this time to Sacred Heart in Spokane.

Jessica Rachels, David’s mom, said her son is regaining certain motor and bodily functions, and is able to communicate through blinking.

“Today I asked him if he could see and blinked that he could and, ah, it was just amazing,” Jessica said of David’s recovery. “The nurse said ‘I usually don’t use the word excellent, but David is doing excellent.’”

At the beginning of his recovery, David was put on an extracorporeal membrane oxygenation machine, but has been taken off thanks to his progress.

An ECMO machine is a piece of medical equipment that assists in breathing and circulation. It pumps, oxygenates, and circulates a patient's blood outside of the body, which allows the heart and lungs to rest.

“If he weren’t wearing his helmet he wouldn’t have been able to do the ECMO machine,” Jessica said.

It is unclear how long David’s recovery will take, but the Rachels said they are hopeful that David did not suffer any severe neurological damage despite experiencing a stroke days after the crash.

While it has been difficult, the Rachels said support from community members and hospital personnel are helping them through this time.

“It’s been very emotional with all of the giving from the community,” Jessica said. “The meals, the prayers, financially — we didn’t expect that. We just feel so extremely blessed and very grateful. … Friends, family, the community, God, our faith is helping us to hang in there.”

Those interested in donating to the Rachels can do so by visiting their fundraising page at GiveSendGo.com/DavidRachels.

“Now that David can answer questions, we’re going to involve him in all of these decisions,” Jessica said, “it’s his body, but we won't let him give up.” 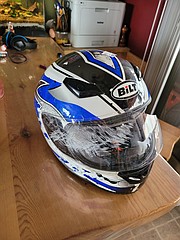 If David Rachels had not been wearing a helmet, certain life saving procedures would not have been available to him during the recovery process.