Carly Osika shows off her hardware from the IN-CMAs, where she was chosen as Favorite Solo Act.
(Photo courtesy CARLY OSIKA)

Rusty Jackson and Cassandra Wheeler perform at the In-CMA's on Sunday.

The many performers of the 2022 IN-CMA Awards on stage together at the Bing Crosby Theater stage.

Some of the most prolific country music artists in the region had a grand old time at the fifth annual Inland Northwest County Music Awards on Oct. 23.

Held for the first time at the Bing Crosby Theater in Spokane, more than 500 people showed up to support their favorite local musicians and, of course, listen to some great music.

IN-CMA founder and organizer Rusty Jackson was overjoyed with how the event went, giving kudos to producer Joey Anderson and the rest of the team for making the night so special for so many.

The night featured 25 separate acts from 15 individual acoustic performers and 10 bands, many of which were from North Idaho.

One artist who “cleaned-up” at the event was Carli Osika of Coeur d'Alene, who was voted Favorite Solo Act of the year, on top of being runner-up in the Favorite Singer-Songwriter, Favorite Female Vocalist and Song of the Year categories.

“It was a really cool event,” Osika said. “I hardly ever get to see other local artists perform since I’m always playing my own gigs, so it was really fun for me to meet everyone and see them play.”

When it was announced that she had won Favorite Solo Act, Osika said she was a bit surprised.

“It’s my first year being included in the IN-CMA awards at all, and I really wasn’t expecting to get so many nominations, let alone win anything," she said. "It was a pleasant surprise and an honor, for sure.”

Nominees for the IN-CMA’s are chosen with the help of venues in the region, which are given ballots and asked to provide five choices for each category. After the nominees are set, the winners are decided by popular vote.

Jackson said this year the event had more than 2,000 ballots cast, which helps cut down on nominees simply getting a large group of friends and family swinging the vote.

“I think the fans got it pretty right,” he said.

Jackson, who works as a software engineer, started the IN-CMA show as a way for local artists to get the word out about themselves and recognize the immense amount of talent in the Inland Northwest.

“I had kind of become fascinated by marketing because I realized that even though I wrote software, the only reason people bought it was because these guys came up with clever ways to describe it," Jackson said.

After a while of the group serving as a platform to get word out about events, Jackson decided the IN-CMA needed an actual award show.

Held the first two years at the Kroc Center and the next two at Nashville North in Post Falls, Jackson said he was excited to have the event at a venue that gives off that “award show vibe.”

The next awards show is scheduled for Nov. 5, 2023, at the Bing Crosby Theater in Spokane.

“Spokane is becoming the Nashville of the Northwest,” Jackson said.

To listen to the full interview with Rusty Jackson, check out the Friday, Oct. 28 episode of the North Idaho Now podcast.

Entertainer of the Year

Song of the Year 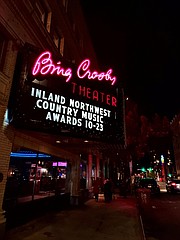 The many performers of the 2022 IN-CMA Awards on stage together at the Bing Crosby Theater stage. 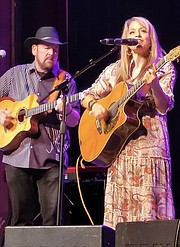 Rusty Jackson and Cassandra Wheeler perform at the In-CMA's on Sunday.