The Wampus Cats line up for the snap in front of the Lakeside end zone.
Chanse Watson

Clark Fork junior Chase Sanroman runs the ball in for a touchdown.

CLARK FORK – The Clark Fork Wampus Cats put on a clinic for their homecoming crowd Friday night, as they handedly defeated Lakeside 46-0 for their fourth conference victory.

Wasting no time, the Wampus Cats stormed out of the gate in the first quarter with two touchdowns and never took their foot off the gas.

“We talked about getting a fast start,” Clark Fork coach Brian Arthun said. “The kids came out the first quarter and just dominated from the first snap.”

Going into halftime, Clark Fork sported a healthy 32-0 lead, due in large part to the efforts of junior Chase Sanroman.

During halftime, offensive lineman Nathan Shelton and Paige Valliere were announced to an energetic crowd as homecoming king and queen.

Speaking of Shelton, Arthun commended him after the game for his physical play and solid positioning.

“He’s definitely the heart and soul of our defense.”

Overall, Arthun was pleased with the performance of his team from start to finish.

“I thought we executed extremely well,” he said. “Offense and defensive lines controlled the line of scrimmage.”

He added that this win, a second of a back-to-back, was a good way to go into arguably their biggest game of the season next Friday against Mullan/St. Regis.

“They beat us down there, but if we can get them up here, we can be co-champions of the (North Star) league!” 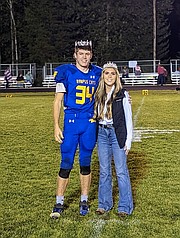 Clark Fork junior Chase Sanroman runs the ball in for a touchdown.