City Beach is among the areas that will be part of the city of Sandpoint's upcoming design competition to create a vision for the greater downtown area.
(Photo by CAROLINE LOBSINGER)

Sailboats take off from Sandpoint City Beach during a past race. The area is among those that will be included in the city of Sandpoint's upcoming design competition to draft a vision for the greater downtown area.

A young bicycle rider watches as CHAFE 150 riders take off from City Beach. The area is among those that will be included in the city of Sandpoint's upcoming design competition to draft a vision for the greater downtown area.

SANDPOINT — The Sandpoint City Council approved the final draft of the 38-page Waterfront Design Competition manual. However, critical revisions based on council input will be made prior to the manual's official release at the next council meeting.

One week after the initial unveiling of the competition and the accompanying manual at the special meeting on Jan. 11, the council met to vote on the manual’s final draft, presented by city administrator Jennifer Stapleton and city consultant Don Stastny.

“The design competition is to move forward the concepts for the city-owned property of the downtown waterfront as well as City Beach and to develop a master plan vision for downtown Sandpoint and how it interfaces with the waterfront,” Stapleton said. “It's a best practice for cities to develop a downtown master plan because it really sets out what the community's vision is for downtown.”

With multiple master plans in the works for the downtown area, including the multimodal transportation plan, and the historic preservation master plan, Stapleton said the overall purpose of the planning is to eventually converge it all into one master plan for downtown.

“The purpose of this master planning effort would be to coalesce all of those individual plans into one master vision for the downtown, specifically our arts and culture,” Stapleton said. “What also drives this is we have seen a lot of development occurring, a lot of property changing hands in the downtown and have heard feedback from the community relative to what that development looks like.”

Part of that feedback has included zoning changes, Stapleton said. Currently, downtown is zoned as a commercial zone. However, Stapleton said there has been an ongoing discussion about changing that to district zoning.

Calling the competition “a visioning process,” Stapleton said it provides an opportunity to gain a new design perspective on how those properties should be handled with an emphasis on waterfront property and City Beach.

“The purpose of this process is really to bring in design team experts that have experts in stormwater management, which is the reason we purchased the Farmin’s Landing property,” Stapleton said. “Also expertise in arts and culture, historic preservation, master planning, economic development, engineering, to lay out their visions after looking at all of our plans, and how those come together and bringing their expertise in those areas for the community to respond to, as well as a jury of technical experts to respond from and provide a technical review.”

What makes the competition so valuable is it allows the city to spend wisely on designing, planning and developing, while giving the city the ability to view the perspectives of multiple teams, Stapleton said.

“It provides us the opportunity, with the same dollar amount that we would expend for a single consultant, to bring in a variety of design teams and vet concepts against one another and have a more robust process that involves the public throughout that process,” Stapleton said. “Moving forward to a final team that is working on a final master plan that the community has input in, that the jury has provided technical expertise and vetting in, and the council ultimately makes the decision as to whether to adopt or not.”

Moving on, Stapleton cleared up a few misconceptions and misunderstandings about the competition, starting with the use of the word “jury.” Councilman Justin Dick said he would like to see the term change to something like “selection committee” to avoid confusion.

“The jury isn't making a decision on behalf of the community that they're serving as a group of technical experts who can provide that feedback to the community and to the council ultimately, and determining whether to move the design team forward, whether to accept the master plan, as we do our other master plans, and provide that technical expertise to the council,” Stapleton said.

Next was the clarification of the public and council involvement in the process. With the competition being broken into three stages, Stapleton said each phase will have different involvement, from different parties.

“In stage one, you'll note that we have a technical jury evaluating portfolios of selected teams that they would recommend narrowing down the pool to participate in stage two, to clarify for us how our public process works for this. They would be narrowing down selected teams,” Stapleton said. “By this, what they're doing is, really it's our technical team, looking at qualifications of submitting teams and making a recommendation ultimately to the council about the selection of those teams that would move to stage two.”

Reiterating that it is not the jury making a decision but the council, Stapleton said the jury’s purpose is to assess and make recommendations for the council to consider in its decision process. Public involvement will serve in a similar manner, as outlined in stage two where designers will present to the public, jury and council, she added.

Stapleton said the design competition is on schedule for June to avoid concern about the impact on other projects, such as the carousel at Sand Creek Landing. Stastny added that other schedule changes include an extra week for submission in phase one and the “mid-course review” will be done in stage three during a one-week period.

As outlined in the Jan. 11 meeting, the competition will be broken into three phases. Stage one will be an open call put out to potential design teams, which then submit portfolios based on the pre-set criteria. Portfolios are then checked for compliance, by a jury of local residents and industry experts who select the design teams which will move onto the second stage. Portfolios would be due Feb. 13.

Selected from stage one, the teams will work on design concepts, due May 11. Stastny told the council after those concepts are submitted, and again will be checked for compliance by a technical advisory group comprised of city staff. The teams will then be revealed to the public at a "meet your designer" night — set for the week of May 15. After considering public input and recommendations from assisting teams, the council will announce its final decision for the teams moving forward on May 23.

The selected team would meet with the advisory group in stage three and refine its proposal, based on input from the community, jury and advisory team. Final design concepts are set to be due by June 16 and presented to the jury. Again the jury will evaluate the plan and make a recommendation to Sandpoint officials for a report to be provided to Council on June 21.

Stastny said he would address the council’s concerns regarding specific due dates, and materials, as well as the dates and points in the competition when the public will be involved.

“It is on the backs of our forefathers and foremothers that this community was built. So I think that's a great call is pulling it out,” Kate McAlister, council president, said. “So that the citizens can actually see when they get to put in their input. And when they get to be a part of the process, because it does, it is for all of us.”

After some discussion, the council agreed there were various concerns about language, proper outlines for public involvement, and specifics as to what materials will be provided to the city council during the competition Stapleton said now the guide will be gone through “with a fine tooth comb” to address concerns and rectify clerical errors. Mayor Shelby Rognstad then moved for a special meeting this Wednesday allowing Stapleton and Stastny adequate time to address concerns before the final document is produced. 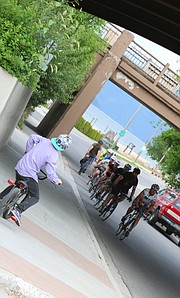 A young bicycle rider watches as CHAFE 150 riders take off from City Beach. The area is among those that will be included in the city of Sandpoint's upcoming design competition to draft a vision for the greater downtown area.

Sailboats take off from Sandpoint City Beach during a past race. The area is among those that will be included in the city of Sandpoint's upcoming design competition to draft a vision for the greater downtown area.