(File photo by KYLE CAJERO) Junior Braden Kappen prepares to land into the pit during the finals of the 4A boys long jump on Thursday afternoon.

(File photo by KYLE CAJERO) Seniors Nikolai Braedt (left) and Jett Lucas tied for the 1600 district title last season and are both chasing the school record in the event in 2020.

An experienced 2020 Sandpoint track squad is held together by this group of 17 seniors.
(Photo by DYLAN GREENE)

SANDPOINT — It’s all about numbers for Sandpoint track and so far, so good.

The Bulldogs had over 100 athletes show up for the opening day of practice, which has head coach Matt Brass excited about what the team can accomplish this season.

“I think we’ll be a lot more competitive,” he said.

The big change this year that will affect the entire Inland Empire League is the automatic state bids getting cut in half. That means only the first place finisher at regionals in each of the 18 events on the boys and girls sides will be guaranteed a berth to state which is down from the two the district has been given in the past.

A handful of schools petitioning to drop down from 5A to 4A resulted in the change and it’s impacting how the Bulldogs are approaching the season.

“This year the regional meet has to be like state for them,” Brass said. “They have to bring that type of intensity.”

Brass said runners won’t be able to be as tactical when the district meet rolls around because they will need to go as hard as possible to get the best time they can to ensure an at-large bid to state.

Luckily, Sandpoint has 11 state returners and plenty of young talent coming up to make up for the lack of spots.

Brass said the numbers on the boys side are good but the girls are lacking depth. Sandpoint sent 19 athletes to state last year and Brass isn’t expecting any drop off from that and believes the Bulldogs have a chance to retake the regional titles after finishing runner-up to Moscow last season.

“I think when you look on paper it will be a really good meet, but I think we’ll be more in the hunt then we were last year,” Brass said.

For the sake of organization, here is a breakdown of the 2020 track team by position group. Spoiler Alert: A handful of Bulldogs are shooting for school records.

The person to watch out for here is junior Braden Kappen, who made it to state in the 100 and 4x100 relay last season. Sprints coach Tom Keefer said Kappen has the potential to finish in the top 5 at state in the 100 and he is currently working on Kappen’s endurance so he can run the 200 this season as well.

“If he keeps his head screwed on straight this year he could really do some damage,” Keefer said about Kappen.

Senior Braeden Dressel was also a member of last year’s 4x100 state relay team and just missed out on at-large bids to state in the 100 and 200.

Injuries hampered Dressel all last season, but now he is healthy and shooting for regional titles in the 100 and 200.

In order to improve his times, Dressel worked on his leg strength, explosiveness and getting out of the blocks faster during the offseason.

Keefer wants to push Dressel to go for the 400 regional title as well and his pitch to him and other athletes who are always hesitant about going all in on the 400 is pretty simple.

Keefer is also expecting big things from senior Walker Herrman, who will be returning soon from a torn meniscus, and sophomore Peyton Ennis who will factor in the boys 4x100 and 4x200 relays.

On the girls side, Keefer has thin numbers and isn’t expecting senior Maddie Morgan to compete on the 4x100 relay team that won districts last year as she is trying to put all her effort into the triple jump. But Keefer wouldn’t be surprised if Morgan changes her mind when they get closer to regionals.

The distance runners might be the Bulldogs’ strongest group. All the athletes on the boys and girls cross country teams that shattered the school record books this past fall and finished fifth and 10th respectively at state, will be on the track for Sandpoint this spring looking to build off that success.

The group has four state returners led by senior Seth Graham who placed fifth at state in the 800. Graham said he wants to repeat as the district champion in the event and place in the top three at state, but his main goal is to break the school record of 1:57.46.

“That’s been on my mind since I was a freshman,” he said.

Senior Bionce Vincent is back after taking seventh in the girls 800 at state in 2019, one spot shy of placing.

Just like the rest of the team, Vincent trained throughout the winter to keep in shape and is confident she can get back to state.

On the boys side, everyone’s eyes will be on juniors Jett Lucas and Nikolai Braedt who tied for the 1600 district title last year. That’s right, not even a photo could separate the two and they both are gunning for the school record in the event this season so expect them to be neck and neck once again.

“I think we’re both feeling it,” Lucas said about fighting for one state berth with Braedt. “The nerves are there and some fear is definitely involved with that but Nikolai and I are best friends so it’s a healthy competition.”

“Iron sharpens iron and that’s definitely one of our beliefs,” she said.

This is where Morgan looks to have her impact this season. The do-it-all athlete claimed the regional title in the triple jump in 2019 and jumps and hurdles head coach Dave DeMers is eager to see what she can do in her final season.

“Last year, [Morgan] had a lot on her plate,” DeMers said. “This year she’s got a clean slate, basketball’s over so she can just concentrate on jumping. I think she’s going to have a great year. She’s basically the leader of the girls jump.”

DeMers is still looking to find some more jumpers in the first few weeks of practice to fill out his team and has several hurdlers, sprinters and distance runners in mind because why not? He was able to turn Kappen, arguably the boys fastest sprinter, into one of the best long jumpers in the state last season when he placed third. DeMers could replicate that again with another dynamic athlete.

Kappen had never tried the long jump until a practice early last season where he jumped 20 feet the first time in the pit. DeMers knew he had something special right then and there and Kappen said he wants to capture gold in the event this season.

DeMers expects senior Christian Niemela and sophomore Luke McCorkle to help the team in the jumps this season and DeMers sees freshman Rusty Lee having an impact right away in the high jump and hurdles.

Senior Paige Davidson, the defending 100 hurdles league champ, is the only state returner in hurdles.

Speaking of Davidson, she missed placing in pole vault at state by one spot last season and is a part of the Bulldogs long list of athletes hoping to rewrite SHS history books in 2020. Davidson is three inches away from breaking the school’s pole vault record and pole vault head coach Paul Hill said Davidson got stronger and faster during the offseason.

Hill is also expecting sophomore Tiffany Brown to take a big step forward this season thanks to extra time spent working on her technique this summer.

On the boys side, Hill believes senior Jake Ryan is primed for a trip to state and he is excited to see what juniors Nate Dotson and Sam Becker are going to do.

“They’re just starting to come into their own this year,” Hill said, “and really get the hang of pole vault and their speed has really improved.”

Throws head coach Ryan Knowles expects a lot from his athletes and he has liked what he has seen so far.

And why wouldn’t he? He has state qualifiers Brandon Casey and Kayla Remsen coming back and 22 throwers on his team this season.

Casey won the district title in the discus in 2019 and finished runner-up in the shot put. Knowles said Casey can win the regional crown in both events this season and senior Jake Suhr has a chance to make it to state in discus.

Remsen made her presence known to all of North Idaho in her freshman season, coming out of nowhere to take first in the shot put at regionals and second in discus.

Knowles realizes the trajectory Remsen is on and can’t wait to see what see does this season.

“I expect her to explode,” he said. “She really has bought in and she did a lot of work, and I think she’s going to make some big jumps in both the shot and the discus.”

Remsen said she is focusing on herself this season and is motivated by the thought of earning a state title during her high school career.

“I just want to push myself more and keep doing what I love the most,” she said.

An experienced 2020 Sandpoint track squad is held together by this group of 17 seniors. 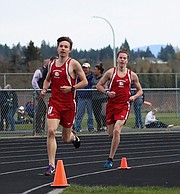 (File photo by KYLE CAJERO) Seniors Nikolai Braedt (left) and Jett Lucas tied for the 1600 district title last season and are both chasing the school record in the event in 2020.