Sandpoint residents come out to vote on election night

Residents line up to vote at the Sandpoint Community Hall to vote Tuesday night.
Photo by RACHEL SUN

Rob Manly, one of the poll workers at the Sandpoint Community Hall, talks to a young Sandpoint resident, who looks at a sample ballot while their parents vote.

As the final hours of polling approached, polling staff at the Sandpoint Community Hall saw a steady stream of residents coming to cast their ballots for the election Tuesday night.

For John Parkinson, 19, it was his first time voting. He said he hoped the country would be less divided than it has been.

“I just want to see this country come together,” he said.

Several voters expressed a preference for President Trump, in some cases with some reservations.

“I like the way the president has been leading the nation,” said Robin Ulbredtch. “Though I don’t necessarily agree with his name-calling.”

She added she believes Trump stands for “Christian and family values,” and hopes Republicans will “stand firm” in upholding those values.

“It’s a highly contested situation. It’s not only affecting the United States, but other portions of the world," said Rick Glaese. “I’m happy with Mr. Trump. He’s not perfect, by any means, but I see him doing a far better job.”

Gina Piazzola, another Sandpoint resident, said she hoped to see the country come together.

“I’m hopeful for change. I think our country has never been worse than it is,” she said. “Every life counts. We should all be treated equally, and come together.”

Rhea Scott, who moved from California, said it was her first time voting in person.

“I hope for a positive future, family values and personal liberties,” she said.

Katherine Funk-Adlard, the USOA “Ms Idaho” was also present as an official poll watcher and said she wanted to thank the military service members for their sacrifice protecting American freedoms.

“Voting [and] being able to speak our voice is an American right,” she said. 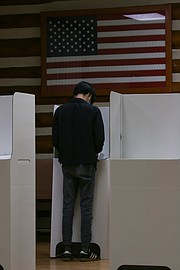 Rob Manly, one of the poll workers at the Sandpoint Community Hall, talks to a young Sandpoint resident, who looks at a sample ballot while their parents vote.