Brian Childs talks to his team at Heritage High during a timeout. Childs was named the SHS boys' basketball coach on Saturday and brings 23 years of coaching experience with him. "He’s an absolute hoop junkie," Athletic Director Kris Knowles said.
(Courtesy photo)

The new Sandpoint High School boys’ basketball coach grew up in Muncie, Indiana. Known as a hotbed for hoops, it was there Childs discovered his love for the game.

“There’s nothing like it,” Childs said about Indiana basketball.

For Childs, becoming a head coach was always a goal.

“I can’t imagine what I’d do with my time if I didn’t have basketball,” he said.

Childs brings plenty of coaching experience with him to Sandpoint High. He has coached high school basketball for 23 years, and 16 of those years have been spent as a head coach.

In the eyes of Sandpoint Athletic Director Kris Knowles, that experience is what made the difference when the five-person interview committee unanimously chose Childs as the next head coach for the Bulldogs.

“What kept creeping up as we did our research was, ‘Man we don’t want him to leave, he’s just really good for our kids,’” Knowles said. “He’s a great mentor.”

The team just went through a tumultuous 2020-21 season that saw Wade Engelson resign as head coach five games into the season. Mike Roos took over the job on an interim basis the rest of the year and the team finished with a 4-16 record.

Knowles said he knew the school needed to hire someone who could come in and navigate the difficulties the program has faced in recent years.

“Brian is a problem solver,” Knowles said. “Brian doesn’t overreact and Brian is a guy that’s going to take every challenge and look at it from the perspective of what’s best for these kids. He’s not going to spend time worrying about the things he can’t control and that’s a special talent for a head coach … Anytime you can hire a guy that’s been a head coach for 16 years, that’s a pretty important piece right there.”

Childs also has plenty of experience with rebuilding programs. In seven seasons as the head coach at Coeur d’Alene Charter, Childs led the Panthers to a 92-65 record and a third-place trophy in the 1A state tournament in 2007.

After that, he took over the reins at Eastbrook High in Marion, Indiana. The school of about 500 students struggled mightily in basketball prior to Childs’ arrival. Across six seasons, he amassed a 54-80 record at Eastbrook before moving onto his most recent head coaching job at Heritage High School in Vancouver, Washington, in 2018.

Childs was in the midst of rebuilding the program at Heritage, before deciding to make the move to Sandpoint.

Due to the pandemic, Childs never got a chance to coach at Heritage this season. In fact, thanks to high school sports seasons being shifted around in Washington, the school’s first basketball game of the 2020-21 season is set for April 12.

Childs said he plans on helping Heritage with the coaching transition and hopes to be all-in on Sandpoint around June 1 once his teaching obligations wrap up in Vancouver.

This past fall when school started up, there was no in-person learning in Washington due to COVID-19. This allowed Childs to work remotely from Coeur d’Alene, where his wife, Kathy grew up.

Childs said a lot of factors went into his decision to accept the position at SHS, but having family close by in Coeur d’Alene was one of the biggest.

But saying goodbye to Heritage was hard, he said.

“While I’m thrilled to have this opportunity to come back to North Idaho and kind of share in Kris’ vision, it wasn’t an easy decision,” he said. “Heritage has just been great to me and my family.”

Ultimately, Childs believes he made the right move for his family. Childs’ oldest son, Conner, will be playing basketball at Walla Walla Community College this winter and his younger son, Parker, played on the junior varsity team at Lake City High as a freshman this season after transferring to the school in October.

Childs has some deep connections at Lake City, and with Knowles.

Childs and Knowles were both assistants for the Timberwolves under coach Jim Winger from 1999-2003. Then Knowles took over the head job for two years and Childs served as his varsity assistant.

The pair has known each other for well over 20 years and Knowles went to Coeur d’Alene High with Childs’ wife.

When the job at Sandpoint opened up, that familiarity with Knowles certainly played a role in Childs’ willingness to take on the position. He knows they could accomplish something special together at SHS, he said.

“We tend to see things the same way when it comes to basketball and I know what he’s looking for up there,” Childs said.

Knowles said Childs’ knowledge and passion for the sport is unmatched.

“He’s an absolute hoop junkie,” Knowles said. “I don’t know if I know anybody ... that loves the game of basketball more than Brian Childs, and that’s not over exaggerating.”

And because Childs was working remotely, he got a chance to watch and attend a handful of the Bulldogs’ games this past season.

“He’s not coming into this thing completely foreign to what’s going on in Sandpoint,” Knowles said.

Childs said the Bulldogs’ youth and inexperience showed this winter when they battled senior-laden Inland Empire League teams, but one thing could never be questioned — their effort.

“I thought the kids did a really good job of competing,” he said.

Childs even attended the 4A Region 1 loser-out game at Moscow and he said the team showed a lot of resilience by holding a lead entering the fourth quarter after losing to the Bears by 23 points just two days earlier.

Childs hopes to build off that experience this winter.

Childs will be bringing an up-tempo style of basketball to the Bulldogs and an offensive philosophy built on motion, stretching the floor and knocking down 3-pointers.

Childs said he is looking forward to getting an offseason plan put together for the summer and working with this group of kids.

“I just look at the athletes that are coming back and I think we’re going to be able to do a lot of different things,” he said. “We’re going to have some options next year.”

Regardless of what the Bulldogs do during the offseason, Knowles believes Childs will have the team more than ready for game one of the 2021-22 season.

“You’re not going to see a team in the Inland Empire League next year that’s going to be more prepared than Sandpoint, I guarantee you,” he said.

To turn around a program, Childs said you have to invest time and teach kids the fundamentals prior to them reaching high school. He plans on being visible at AAU games and getting involved in the basketball programs within the community.

The Bulldogs haven’t won a regular season game against a 4A IEL opponent in five years and the team’s last appearance at state was in 2009.

Childs said it won’t be easy to right the ship in a rugged IEL, but he’s along for the ride and willing to put in the work to make it happen.

“This is a really tough league … but that just comes with the territory here,” he said. “There’s good basketball in North Idaho and I think I’m up for the challenge.”

Knowles said he is excited about what the future looks like under Childs.

“I couldn’t be happier,” he said. “I feel rejuvenated. I feel like we’re going to be in a really good position.”

And Childs is in it for the long haul and doesn’t have plans on leaving the program anytime soon.

Knowles said he spent the better part of three months working the phone and searching for the right person for the job. Out of the 12 applicants, Knowles thinks they hired the one who can change the culture at SHS and turn the tide on the program.

“Boys basketball is a job that you got to have a special person in, and I really believe we found that guy,” he said. 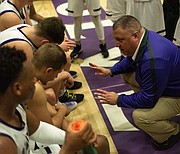 Brian Childs talks to his team at Heritage High during a timeout. Childs was named the SHS boys' basketball coach on Saturday and brings 23 years of coaching experience with him. "He’s an absolute hoop junkie," Athletic Director Kris Knowles said.