Tyler Korn gets down low to return a shot on Thursday.
(Photo by DYLAN GREENE)

Josh Embree prepares to hit a return on Thursday.
(Photo by DYLAN GREENE)

Christian Story gets down low to return a shot on Thursday.
(Photo by DYLAN GREENE)

Charlie Johnson elevates to hit a return on Thursday.
(Photo by DYLAN GREENE)

Josh Embree drives toward the net and hits a volley on Thursday.
(Photo by DYLAN GREENE)

Patch Howard returns a serve during a mixed doubles match on Thursday.
(Photo by DYLAN GREENE)

SANDPOINT — The Sandpoint tennis team is showing no signs of slowing down.

The Bulldogs continued to roll through their schedule on Thursday, downing Lake City 9-3 at Travers Park. It was their second win over the Timberwolves this season and SHS improved its overall record to 8-1-3.

"Today’s match lived up to all my expectations even though it almost gave me a heart attack," head coach Kent Anderson said.

The near heart attack probably occurred during a thrilling three-set battle at No. 2 boys doubles.

Carter Johnson and Tyler Korn dropped the first set to Lake City, but fought back to force a 10-point tiebreaker. In the tiebreaker, points were traded back and forth until the Timberwolves earned a chance to win the match leading 10-9.

With their backs against the wall, Korn and Johnson claimed three straight points to win the tiebreaker 12-10 and secure the victory.

The match was a true test of nerves, Anderson said.

"There were a lot of big shots and pressure points," he said. "Matches like these are the ones that make a person tournament tough."

However, the story of the day was the dominance of the girls. They won all five of their matches.

"This was supposed to be a rebuild year for the girls after we graduated almost the entire team last year," Anderson said, "but this group doesn’t care about that."

"Maise continued her dominance at No. 2 picking deep volleys out of the air and frustrating her opponent," he said. "I love her intensity."

In doubles, Maile Evans and Berkeley Cox secured a 10-4 victory, and Denali Terry and Olivia Petruso grabbed a 6-3, 7-5 win.

Anderson said his No. 1 girls doubles team got back on track.

"Olivia and Denali returned to their winning ways with a strong performance using good serves and exceptional net play to keep their opponents off balance," he said.

Josh Embree and Christian Story faced a tough Timberlake duo at No. 1 boys doubles and prevailed 6-2, 6-4.

"Ultimately, it was their reflex volleys at the net that made the difference," Anderson said.

The Bulldogs swept mixed doubles. Tyler McNamee and Kailee McNamee won by default at No. 2, and Patch Howard and Aden Heitz cruised to a 6-2, 6-1 victory at No. 1.

"Patch and Aden continue to improve and have proven to be very difficult to beat," Anderson said. "Patch’s consistency, and Aden‘s quickness and dominating presence at the net is a tough combination for their opponents."

Patch Howard returns a serve during a mixed doubles match on Thursday.

Josh Embree drives toward the net and hits a volley on Thursday. 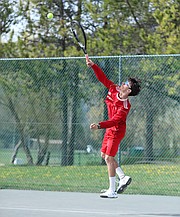 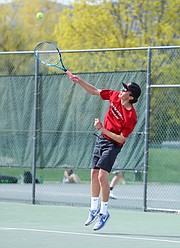 Charlie Johnson elevates to hit a return on Thursday. 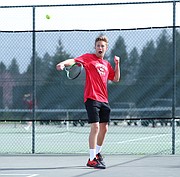 Christian Story gets down low to return a shot on Thursday.

Josh Embree prepares to hit a return on Thursday.

Tyler Korn gets down low to return a shot on Thursday.