Blake Heather is shown with his 26.1 pound rainbow that won the LPOIC Fall Derby in November 2020.

“Throughout Idaho, the number of anglers and amount of time they spent fishing increased substantially in 2020,” Regional Fishery Manager, Andy Dux, Idaho Department of Fish and Game said. “The pandemic motivated many folks to spend more time fishing because it was an outdoor activity that could be done safely and close to home.  Fishing turned out to be a great alternative activity for many people who normally would have spent their free time doing other things.  Fortunately, our region offers lots of great fishing opportunity and was able to accommodate this increased fishing activity.”

Dux called the fishing on Lake Pend Oreille “outstanding.”. Dale Greene, the secretary of the Lake Pend Oreille Idaho Club said that he’s been seeing fewer fishing boats on the lake but that there’s been an increase in the number of large rainbow caught.

Kokanee are the main food source for rainbow trout. The giant rainbows have made Pend Oreille a destination fishery for decades. That was about to go under until IDFG made a concentrated effort to reverse the decline of kokanee some years ago.

“The kokanee population has recovered and is at the highest abundance since the early 1990s,” Dux said. “In addition, the fishery is more diverse than it has been at any other time in history.”

Besides the good fishing for kokanee and rainbow trout, there are eleven other species including smallmouth bass, walleye, northern pike and brown trout for anglers to target.

“The biggest negative on Lake Pend Oreille is the threat posed by walleye and northern pike, both of which have become more abundant over the past decade,” Dux said. These non-native fish have migrated down the rivers from Montana over the years.

Dave Gillespie, long-time LPOIC board member was more emphatic, “We believe those responsible for the illegal planting of any invasive species into our waters should be prosecuted. That includes those who illegally planted walleye and pike into the waters of Montana.

Dux said that although non-native fish might be fun for anglers, they have the potential of threatening the “long term sustainability of the fishery that has proven to be very sensitive to high levels of predation in the past.” He said that IDFG is working to learn more about these species and encourages anglers to target them for harvesting.

Both Gillespie and Greene said they support harvesting walleye, northern pike and lake trout. As an organization, LPOIC is supporting catch and release of rainbow trout to help the trophy fishery expand.

“Four out of the five fish placing in last fall’s Derby swam away, hopefully to spawn!” Greene said. To encourage catch and release, LPOIC is offering a $500 bonus to anglers who place in their Spring Derby slated to start on April 24 and run until May 2. The Button Auction will be held this year on April 17 at the fairgrounds.

Besides hosting Derbies in the spring and fall each year, LPOIC supports protecting the habitat for the fishery. Greene said that this year the club plans to continue maintaining spawning gravels at Spring Creek and Sullivan Springs.

But, as many anglers will tell you, fishing isn’t just about Lake Pend Oreille. The smaller lakes, rivers and Priest Lake offer a diverse opportunity to catch fish as well.

“The biggest change on Priest Lake is that mysis shrimp, a small freshwater shrimp, have dramatically declined in abundance.  These shrimp are the primary food source for lake trout. With less food available, lake trout are now skinnier and their fillets are sometimes not the bright orange color that anglers have grown accustomed to. We are working to understand more about the mysis shrimp decline and whether it will be short-lived or not.”

Talking about change, Dux said that the biggest change to area fisheries isn’t the biological impact, but the social impact.

“Rapid population growth and the increased amount of outdoor recreation triggered by the pandemic have made access to some of our fisheries more challenging. For example, many boat ramps have been much busier and anglers are often competing for access with non-angling recreationists,” Dux said.

“We also have a lot of anglers who are new to the area and are not familiar with our fisheries, regulations associated with those fisheries, and management issues surrounding those fisheries. In the coming year, I expect more of the same. Population growth and the increased popularity of outdoor recreation are likely to continue in 2021 and will bring continued challenges for managing our local fisheries.”

And as for climate change there have been some effects to the local fisheries as well, Dux explained. “For instance, average summer water temperature is trending upwards over time in many waters and reduces the amount of habitat available for certain species of fish that depend on cold water, such as native bull trout.

“We also are experiencing warmer winter temperatures on average, which has resulted in less ice fishing opportunity than we had historically.  These changes make it even more important for us to conduct routine population monitoring to understand what changes are occurring and how it influences various fish populations and fishing opportunities.  This information will allow us to adapt our management as climate change occurs to provide sustainable fisheries into the future.” 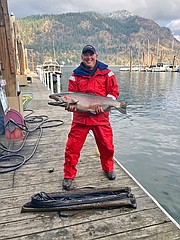 Blake Heather is shown with his 26.1 pound rainbow that won the LPOIC Fall Derby in November 2020.