An artist's rendition of what Sandpoint Ice Arena could look like if it is built on county property located between the Bonner County Sheriff's Office and the fairgrounds.
(Illustration courtesy TOM RUSSELL)

The press release posted to BCSO’s Facebook page on Thursday focused on the plot of land located on N. Boyer Road between the fairgrounds and the sheriff’s office.

“This shameless ‘bread and circuses’ act was perpetrated so the people of Bonner County would have a place to go ice skating. If you don’t appreciate this DEFUND THE POLICE action, then call, write, or visit your Bonner County Commissioners and demand that they rescind this give away of public property!”

Commissioners voted on Oct. 26 to enter into a memorandum of understanding with non-profit organization Sandpoint Community Center Corporation to construct an $8 million ice rink on county-owned land.

The agreement does not sell the land the ice rink will be constructed upon, nor will the county taxpayers need to contribute to the cost of the rink. The project will be funded by the non-profit organization.

“The Sandpoint residents have long sought for an ice arena in town,” said Rognstad at the meeting. “I’m here to say that I want to do whatever I can to support it, on behalf of the city.”

Rognstad was referring to the local option tax that was put before voters on Nov. 2. However, the measure failed because it did not reach the 60% supermajority needed, but it did receive more votes in support than against. Rognstad also said that he would assist with the zoning change needed before construction begins on the project.

Wheeler seems to have a different understanding, according to the press release.

“The Bonner County Commissioners voted unanimously to give away four acres of public property,” said Wheeler, “This land had been set aside by a previous Board of Commissioners for future law enforcement and judicial expansion.”

“What the sheriff’s saying is absolutely fraudulent,” said McDonald on Thursday. “The memorandum of understanding does not give the land away. The county still owns the land.”

“The area where we’re talking about putting the ice skating rink is where the Idaho National Guard had started to build an armory, and then they decided to vacate the project,” McDonald said, “The statement about us defunding him is completely wrong. There’s nothing defunded. There was never, to our knowledge, a justice facility planned there.”

“The only shred of truth in it was that Commissioner Bradshaw made a motion and it was seconded and we approved it,” he said.

The press release implies that the county was giving away the land that the ice rink will be built upon.

“The giveaway of this invaluable, irreplaceable land was done without consulting the people it affects the most: Justice Services, the Prosecutor, the Judges, Juvenile Detention, the Clerk, and myself (for the Sheriff’s Office). Further, no consideration was given to future indebtedness for Bonner County taxpayers.”

“Sandpoint Mayor Shelby Rognstad spoke and connected the project to the proposed Recreational Tax. Commissioner Dan McDonald basically said that a group of guys have wanted an ice rink now for 20 years, and he was proud to take the lead to make it happen. Then Commissioner Steve Bradshaw made the motion to give away the property.”

Wheeler could not be reached for comment on Thursday evening. 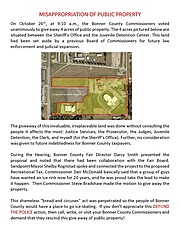