Ray Calhoun was a young Marine in South Vietnam in April 1967. He and his platoon has been charged with leading an assault on Hill 881 South. More than 40 years later — after a delayed caused by the fact that many of the platoon's leaders were killed in the battle — Calhoun and two fellow Marines were presented with the Silver Star in 2009.
(Courtesy photo)

Ray Calhoun as a young Marine during the Vietnam War era.

Ray Calhoun is presented his Purple Heart by Lt. General Louis Walt at NSA DaNang aka China Beach in May 1967.

Lester R. "Ray" Calhoun Jr. was a young Marine lance corporal in South Vietnam in April 1967 when he and his platoon were charged with leading an assault to secure Hill 881 South.

During the night leading up to the assault, the North Vietnamese soldiers shouted into the night, telling the Marines they would die in the morning. The taunts would prove prophetic, according to a 2009 San Diego Union Tribune story. By the time the battle ended, three-fourths of the soldiers were either wounded or had been killed.

Assigned that fall to the 3rd Battalion, 3rd Marine Regiment at Camp Pendleton, he was sent to Vietnam almost immediately, according to the San Diego Union Tribune story. The company saw action from the start but nothing would compare to the battle that came in April 1967. The North Vietnamese looked to attack a U.S. military outpost near Khe Sanh, which was on a vital supply route.

The Marines countered with a series of assaults on the uplands surrounding Khe Sanh that came to be called the “Hill Battles,” according to the story.

Throughout the April 1967 fight, Calhoun, who now lives in Bonner County, alternately fought the enemy and fought to save his fellow Marines. He would pass out twice during the battle, wakening each time to resume the fight.

Calhoun, who was a M-79 grenadier, and his company were advancing to secure Hill 881 South in the first Battle of the Khe Sanh when the numerically superior enemy force attacked and inflicted heavy casualties on the platoon.

Advancing with the platoon headquarters, Calhoun was rendered temporarily unconscious from an enemy mortar barrage that killed the platoon leader and severely wounded the radio operator. When he regained consciousness, he assisted in medevacing casualties to a bomb crater and providing effective counter-fire.

Repeated enemy attack inflicted heavy casualties and created a gap in the Marine defensive line. Recognizing the danger of possible enemy penetration, he attacked an enemy bunker complex and destroyed four positions with accurate M-79 fire. He then advanced to a position too close to fire his M-79, but delivered M-16 suppression fire and threw grenade into more enemy bunkers, thus preserving the line.

As Marine artillery strikes temporarily prevented an enemy counterattack, Calhoun again exposed himself to danger by moving throughout the battlefield to assist the wounded, collect and redistribute weapons and ammunition, and secure battle dressings from the dead to treat the wounded. Lance Corporal Calhoun persevered despite grenade and mortar explosions until receiving a severe head wound that rendered him unconscious for a second time.

Amazingly, he recovered yet again and continued to fight the enemy. Lance Corporal Calhoun's courageous actions in disregarding his own safety and collecting and redistributing critical resources enabled his platoon to continue to fight and directly led to the Marine line holding.

After recuperating, Calhoun left the Marine Corps a few months later and used his GI Bill benefits to earn an accounting degree. He married, raised a family and starting a company that harnesses electron beams for medical uses.

He lost touch with all of his Marine buddies. Then in 1996, he read a newspaper article about Admire's appointment as commander of the 1st Marine Division at Camp Pendleton, according to the San Diego Union Bulletin story.

Over several years, they tracked down other Mike Company veterans and started to hold reunions, where Admire learned that, despite the heroic conduct on Hill 881, none of the survivors from his old platoon had received awards for their bravery. That led Admire to submit Silver Star nomination packets for Calhoun and platoon mates Don Hossack and Tommy Wheeler.

Forty-two years later, the trio would be presented with Silver Star — the nation's third-highest award for combat bravery during a 2009 ceremony at the Marine Corps Recruit Depot in San Diego.

The presentations follow six years of Pentagon review, through a process approved by Congress to recognize overlooked valor from past wars, according to the Union Bulletin.

Ray Calhoun is presented his Purple Heart by Lt. General Louis Walt at NSA DaNang aka China Beach in May 1967. 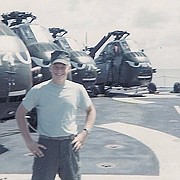 Ray Calhoun as a young Marine during the Vietnam War era.