Give thanks for wild women

In "Wild: An Elemental Journey", Jay Griffiths urges us: “Don’t waste your wildness. It is precious and necessary. In wildness, truth.” The truth will set you free.

I met Phoebe at a crosscut saw training with the Cabinet Ranger Forest District in Montana on my first week of work for Friends of Scotchman Peaks Wilderness. I was timid because I hadn’t used the tool before, and she helped me feel comfortable.

I liked Phoebe immediately. She has this powerful and assertive way about her that demands respect while simultaneously communicating that it doesn’t matter if you respect her because she is going to go her own way regardless.

I’d like to try to characterize Phoebe for you although I adore her for being uncontainable.

She drives a 1994 Chevy, for starters. She carries her mother Emma’s Olympus OM-1 film camera from the 70s around to snap photos which she gets printed out to give her friends. She wears bandanas, high-waisted pants, overalls, pantsuits, bikinis; never a bra.

Phoebe is kind and exceedingly generous. She is inclusive to the extent that there is literally no room left at the table. She is moving 100 miles an hour. Where is Phoebe? Maybe California, maybe Colorado, could be South America, maybe sailing around the world.

Because the fact of the matter is that she literally grew up on a boat.

“You need to read these books,” she says handing me "Wild" by Cheryl Strayed and "Into the Wild" by Jon Krakauer. (I note some common themes, here.)

“We’re going floating down the Bull River,” she texts. “See you there in half an hour?”

She brings everyone back a jar of Trader Joe’s salsa from her trip out to the Oregon coast. She can snowboard and surf and loves disco. She has been known to flash the camera. Barbecue at Phoebe’s place in Trout Creek tonight!

We stay up late to watch the stars. She tells me how Danny broke her heart, how reading Rupi Kaur poems got her through. I tell her that I know the feeling. We note that women need to stick together.

She picks me up at the cabin in her Chevy and we cruise Highway 2 into Libby blasting Heartless Bastards and Futurebirds. We stop at Kootenai Falls and make a pact to always be friends.

She leaves a note on my car with a wildflower.

I leave a note on her counter with a record.

She leaves a photo of me jumping into Rock Lake.

I leave a message that I’m going out of town.

She sends word that she’s left for the city.

I always notice that after spending time with Phoebe, I feel a little bit lighter. And it isn’t just that she is delightful and energetic. No doubt about it, Phoebe has incredible personal traits, but there is something more to it than that.

This got me thinking.

You know how spending time with some people is a real drag? Being with them leaves you with a feeling of having spent time at the office sitting behind a computer screen for days on end doing meaningless tasks?

It’s doldrums passing on doldrums. It’s like hanging out with zombies; people who seem to be alive, but have no spiritedness. (Yes, I am meaning to be hard on you.)

Some people are like the worst parts of our society.

But some people are like the best parts of our society. Which in my mind has nothing to do with society at all, and everything to do with Wilderness. And by wilderness, I mean wild.

Spending time with some people feels like jumping into mountain lakes, staying up all night to see the northern lights, running as fast as you can across a field because you can.

Phoebe is one of those people.

More particularly, Phoebe is one of those women. Wild women. She reminds you who you are, which is not a caged animal even if everything around you suggests that is the case.

Phoebe is free like you are free. (And, me too.)

We all need a Phoebe. Better yet, we should all be like her, carrying the wind on our backs.

In "Wild: An Elemental Journey", Jay Griffiths urges us: “Don’t waste your wildness. It is precious and necessary. In wildness, truth.”

The truth will set you free.

I give thanks for wild women.

Amy Rae Pearson is a writer, teacher, and wilderness advocate. Pearson has worked for the Park Service, Forest Service, as a professor, and now as the Northwest Montana outreach coordinator for Friends of Scotchman Peaks Wilderness. 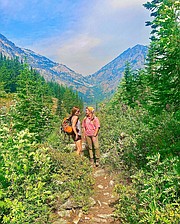 In "Wild: An Elemental Journey", Jay Griffiths urges us: “Don’t waste your wildness. It is precious and necessary. In wildness, truth.” The truth will set you free.