Raye Johnson gives a homeless man a hug after presenting him with a Christmas stocking full of gifts.
(Photo courtesy TRINA JOHNSON)

Raye Johnson puts together a Christmas stocking in preparation for giving it to a homeless person to make their holiday brighter.

SANDPOINT — They were driving across Spokane a few years back when Raye Johnson, then 4 years old, noticed a homeless camp.

A short while later, her mother, Trina Johnson, asked her what she wanted for her birthday.

"I want stuff for the homeless," Johnson said her daughter told her. "I want to go back to Spokane."

By the next year, Raye was insisting her parents and siblings go with her to Spokane to take Christmas to the homeless so they, too, could celebrate the holidays.

"I wanted to be nice and make people have a smile on their face," Raye told the Daily Bee. "And I felt like they would like it a lot."

The packages contain gloves, hats, heavy blankets for warmth, and food — treats, Raye emphasizes, special goodies that the homeless would otherwise not get — as well as surprises for homeless women.

There are notebooks and, this year, tarps because many at the camps had asked if the family had any. And, since some of the homeless have dogs, Raye is working to get food and treats for them as well.

"Instead of necessarily feeding and clothing them, she's trying to make Christmas special," Johnson said.

Raye said she is hoping to put together about 400 to 450 backpacks.

"But that number keeps growing," Trina Johnson said with a laugh as Raye motioned her hand upward.

Once the gifts are packed into the backpacks — in years past, paper bags and Christmas stockings have been used — the family will load them into a trailer and hit the road to Spokane. Then, they'll drive around and look for camps.

While there are some that she wants to see again, she also doesn't want to see them at the same time. That, Raye said, is a sign that they have maybe found a home.

"There were two rapper guys that I really want to not see again, but I do," she said.

Raye forms connections with the men and women and things about them and wants them to have a good life. When she doesn't see them, it may mean that they may have been accepted into a shelter or maybe now have a home.

"She likes to just have conversations with them," Kyle Johnson said, prompting Raye to enthusiastically nod her head up and down.

"Yeah," she added. "I don't just give the stuff and then drop it off and then run. I talk."

The conversations can range from how they got onto the streets or what they like, "random stuff," Raye said.

Now in its third year, it has become a family tradition that, after a small family celebration at home, to pack up the trailer and head into Spokane. They're usually on the road by 10 a.m. and are there until dark.

"It's how our family celebrates Christmas Day," Trina Johnson said.

"Until our legs hurt," Raye quickly adds, prompting her mom to laugh.

When asked what her family thinks about the project, Raye said they like it.

"Because it's family and it's helping," she added.

Having been in a spot when they've needed help, Kyle Johnson said that if they see someone in need, to reach out and offer to help. On a recent trip, the family noticed an RV with a vent in danger of coming off. They followed them into the rest area and soon, Kyle Johnson was up on the roof, helping the couple with road maintenance to get them on their way.

"If there's a need that needs met, just meet it if we can," added Trina Johnson. "It seems like just a lifestyle more than anything. We don't set out on any given day to just help somebody. But if we see a need, we try and meet it. And I think she's the same way."

That act of kindness when they've been stuck from someone they don't know has meant a great deal, Kyle Johnson said.

"I know how it makes me feel [to get that help," he said. "So I think seeing her with with the homeless and seeing her gusto going out there in giving hugs, and it's the connection, I think that impacts her the most. It's maybe not some necessarily the gifts but like she said, seeing their reaction … I mean, I don't know how many people just break down in tears and just say "Oh my gosh, thank you."

Being able to help others makes her happy, Raye said. "I just feel kindness," she added before trailing off.

"I know you had mentioned that you feel really grateful that you're able to help them," Trina Johnson reminds her. "That was on your gratitude list one day when we were talking about gratitude. Among the things you were grateful for was your ability to be able to help them."

Kyle and Trina Johnson said they weren't surprised by Raye's determination and compassion for others.

"It's really neat to watch her go up and interact with them," Trina Johnson said. "It's really incredible to see her effect on other people and see her seeing a need, meeting a need, and doing it in the force of Raye."

"She has affected us, too," Kyle adds. "I think a lot of times, we would kind of get stuck in the tradition. I think now for me, it's more of a 'Hey, let's give as much as we can you know ourselves' and she's inspired me to do more."

Donations are being accepted through Dec. 15.

The family has created an Amazon wishlist, which can be found on their farm's website, Makers Long Acres. They can either order on Amazon or purchase the items and drop them off at Utara's Brewing Company, 214 Pine St., in Sandpoint or Messy's Burgers, 6246 W. Maine St., in Spirit Lake. 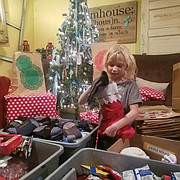 Raye Johnson puts together a Christmas stocking in preparation for giving it to a homeless person to make their holiday brighter.