Critters, kids and a fair amount of fun

Young cowboys and cowgirls rest easy after competing at a past World's Smallest Rodeo at the Bonner County Fair. This year's event will be Friday, Aug. 19.
(File photo/CAROLINE LOBSINGER)

Raye — also known as Farm-Her Raye — Johnson finds a comfy spot to lay as she gives her pig Buttercup (aka Butters) a hug at a past the Bonner County Fair.

A young pig makes a dash freedom in the annual pig scramble at the 2020 Bonner County Fair.

A young cowboy watches the action during a past swine competition. The Bonner County Fair kicks off Wednesday and continues through Saturday.

A youngster gets ready for a beef cattle showing at a past Bonner County Fair.

Kinzley Williams gives her goat a hug as she waits to compete in the Peewee division as some pig and goat classes, among others, at a past Bonner County Fair.

SANDPOINT — There's something for everyone at the fair.

And perhaps most of all, Bonner County Fair Director Darcey Smith said plenty of old-fashioned fun.

"I strongly believe we are just so special because we've stuck to our roots," Smith said. "We've stuck to the community. And, you know, it's so hometown feeling that even people that haven't lived here, their whole lives will run into someone they know here."

It might be a neighbor showing an animal or a grandkids taking part in the Market Animal Sale. It might be someone you from church who always submits their prize-winning flowers.

"It just warms your heart," she said. "It's something good that people look forward to every year."

Commercial booths include everything from gifts to home and garden booths to political candidates. So many folks signed up for a booth, Smith said the fair had to reconfigure exhibit space, both inside the Main Exhibit Building and outside.

"We are full," she added. "Our booths are full this year, the food court's full. We had to move people around because they have bigger trailers this year, the main exhibit building was full."

The exhibit space is so packed that when a vendor realized they only needed one booth space instead of the two they signed up for, it took Smith less than 10 minutes to find a replacement.

"So I'm excited. I'm really excited this year for fair," said Smith as the bustle of activity and vendors setting up their booths echoed through the fair office.

A whole host of entertainment is on tap, from balloon artists to jugglers to comedians and musicians. Smith said a combination of both returning favorites and new activities dot the lineup, with a lot of interaction with the audience. In addition to the "Concert in the Dirt" to a free ranch sorting competition, the fair also features the Challenge of Champions bull riding competition on Friday night and the demolition derby on Saturday.

So far, participation in this year's fair is high with many categories already showing strong turnout by early afternoon Monday, the last day to submit most entries.

While the fair doesn't open to the public until Wednesday, Smith said some judging and showing events will take place Tuesday to fit them in without stressing the 4-H’ers and their animals any more than necessary. Fair officials moved some of the judging and events to Tuesday to create a schedule that works for the most people.

"It's a lot of stress on the animals to be here for a long period of time," Smith said. "Some fairs have them rotate in and out, like the bigger fairs which also helps if they don't have the space they can turn those barns. But for us, we don't want them to be stressed out as long but then that was making showing on top of, and top of and on top of [each other]."

An integral part of the fair are the 4-H kids, who spend all year (or more) raising, training and working with their animals from small to large. The works culminates in Saturday's Market Animal Sale, which allows the youths to sell their animal to the highest bidder.

While some animals don't make weight for a variety of reasons, Smith said those youths can sell their animals directly to buyers.

"They can't sell it at the the actual event itself, but they certainly can sell it to a private buyer, which sometimes is it works out just as good," Smith said. "You may not want a much larger animal but and sometimes those kids they put their heart and soul into it and they're just devastated if their animals don't make weight. So that kind of helps them out like, 'Oh, I still sold it.'"

It may be too late to enter anything in the fair unless you've already done so but Smith said the fair offers a lot of family friendly fun that doesn't need to cost a lot. Most of the contests are free, with the only exception being the greased pig contest which costs $5 to participate.

"But if you win, you get to keep the pig," Smith said of the contest which is sponsored by Makers Long Acres.

Other popular events include the World's Smallest Rodeo, which gives young rodeo stars a chance to show off their skills on their stick figure steeds, best mac 'n' cheese, a "diaper derby" to determine the fastest toddler, and the beard and mullet contests.

"I guess the mullet one is people get so excited over that," Smith said before laughing. "And it's business in the front, party in the rear."

While there is a small parking fee — $3 per day or $10 for the week — Smith said all of the money goes back to the kids, some to the kids at the gate and some for scholarships. Other than that, and a few of the evening activities, Smith said the fair offers affordable fun for everyone.

"Unless you choose to go on to the events that are in the evening, all of our other stuff and the entertainment is free," she added. "So it's a great way and you can bring like you know a picnic lunch if you're on a budget and you can't afford to come and eat and feed your family [at the food court]. There's great entertainment and you come spend the whole day out here and have a lot of fun." 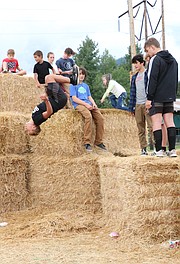 Kinzley Williams gives her goat a hug as she waits to compete in the Peewee division as some pig and goat classes, among others, at a past Bonner County Fair.

A youngster gets ready for a beef cattle showing at a past Bonner County Fair. 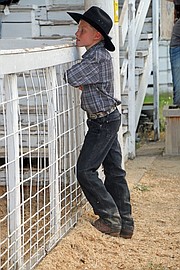 A young cowboy watches the action during a past swine competition. The Bonner County Fair kicks off Wednesday and continues through Saturday.

A young pig makes a dash freedom in the annual pig scramble at the 2020 Bonner County Fair.

Raye — also known as Farm-Her Raye — Johnson finds a comfy spot to lay as she gives her pig Buttercup (aka Butters) a hug at a past the Bonner County Fair.