A map of the Lions Roar Fire boundaries. Located in the Lions Creek drainage east of the Priest Lake State Park Lions Head Unit entrance, the fire burned 45 acres before being 100% contained.

Heavy equipment creates a fireline on the Diamond Watch Fire in Pend Oreille County, Wash. The fire, now mapped at 391 acres, is burning on a ridge on Diamond Peak — about 5.5 miles due west of Nordman.

PRIEST LAKE — The Lions Roar Fire near Priest Lake is completely contained and control returned to the local Idaho Department of Lands district.

"[However,] the public can expect to see occasional smoke from the fire area as internal heavy fuels will continue to smolder," IDL officials said in a press release Monday.

Excess firefighting resources on the Lions Roar Fire were released for assignment to other fires or any potential new fires in the area. Backhauling of equipment will continue as crews continue to mop up spot fires and command transfers back to the Priest Lake IDL fire district.

The news follows a "very successful day" on the fire Saturday despite wirelines being tested by afternoon winds which hit the area.

Infrared mapping was used Saturday to locate and detect areas of heat, helping crews bring containment over weekend from 75 percent to 100 percent.

Meanwhile on the Diamond Watch Fire in nearby Pend Oreille County, Wash., crews continue to work to hold and contain the fire. Now mapped at 391 acres, the fire caused by a lightning strike on July 14.

U.S. Forest Service officials the fire, which is burning on a ridge to the east of Diamond Peak about 5.5 miles due west of Nordman, can be seen from the Priest Lake area in Idaho. Containment of the fire is listed at 0 percent.

"Recent growth was mapped with an infrared flight … [with] most of the heat is showing on the south slope of the ridge," U.S. officials said.

Due to the terrain, U.S. Forest Service officials said direct suppression of the fire is neither a safe nor effective option.

An indirect suppression strategy is being implemented to confine and contain the fire. Using natural and man-made features that contributed to the greatest probability of success, crews and heavy equipment are working a construct a fireline in the area.

Crews have been successful in utilizing heavy machinery to remove excess fuel in the FSR 308 area. However, officials said the fire is backing toward the roadway, which is being used as a containment line.

Handline construction is occurring at the head of Diamond Creek and firefighters are also utilizing natural barriers such as ridges and creeks. Forest Service officials said crews are working to keep the fire from crossing FSR 657 and have placed a sprinkler system on the northern edges of the fire, which is working to keep the fire out of the adjacent timber units.

Crews have been successful in utilizing heavy machinery to improve FSR 308 by removing excess fuel from roadsides which will support holding and containment of the fire. Fire is backing towards FSR 308, which is being utilized as a containment line. This fire activity, along with the use of heavy equipment, has prompted the closure of the area as firefighters continue suppression work on the fire.

As the Lions Roar Fire transitions back to local IDL district control takes place, North Idaho Type 3 incident management team officials said they wanted to thank the community for everything residents did for fire crews.

"[We] would like to thank our firefighting cooperators and the public for all the support," officials said in the release.

Near the Lions Roar Fire, Lion Creek Road 42 and Lucky Creek Road 43 are closed until further notice to allow for mop up and patrol operations.

The best access to the Priest Lake area from the Colville National Forest will be through Newport, Washington via north U.S. 2 and Priest River via Highway 57. 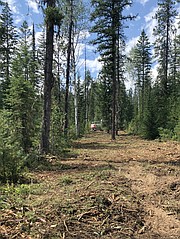 Heavy equipment creates a fireline on the Diamond Watch Fire in Pend Oreille County, Wash. The fire, now mapped at 391 acres, is burning on a ridge on Diamond Peak — about 5.5 miles due west of Nordman.

A map of the Lions Roar Fire boundaries. Located in the Lions Creek drainage east of the Priest Lake State Park Lions Head Unit entrance, the fire burned 45 acres before being 100% contained.