A Sandpoint resident gathers for a candlelight vigil honoring four University of Idaho students who were killed Nov. 13.
(Photo by CAROLINE LOBSINGER)

SANDPOINT — In the darkness, there is hope.

That hope took on a real form, as one person after another in a dark corner of a Sandpoint park gathered as part of a statewide vigil to honor four University of Idaho students killed Nov. 13.

For some, the vigil took place on the U of I campus in Moscow, for others on a corner of a city park with snow falling, and for others, that vigil was online.

All had the same purpose to honor and remember Ethan Chapin, Xana Kernodle, Madison Mogen and Kaylee Goncalves.

"As we light [these] four candles for Ethan, Xana, Madison and Kaylee, let us remember them, and their families and friends that are also very much in need of some community," Elizabeth Wargo, UI assistant professor, said. "One thing that's pretty cool, I think you all maybe know this. But this is happening all over the state in a lot of places, all over the world. And I think that's the power of the Vandal family and the power of Idahoans — to understand that light can come through darkness, community can come through hardship, and that's definitely happening right now at U of I."

U of I students, their parents, and staff are all part of the Vandal family, and that family is coming together to show support, find comfort, and honor the students killed, Wargo said.

"I think [gathering like this] is how we pull through as a Vandal family, right," she added. "We spread hope and light in darkness."

By coming together, with vigils to remember Xana, Ethan, Kaylee and Madison, Wargo said they also said a message to the students' families and friends: You are not alone.

"I think there's a bigger piece to this all, that we're sending a message across the world that we're here for them and for their families. And for anybody else, we don't really know who's really grieving in this situation, right?"

Coming to the vigil was important, many of those in attendance said. Some attended the University of Idaho; others have children or grandchildren who attend.

"I wanted to show support for the families and for the students that are down there," said Lynn Bridges, who attended UI. "I want to tell them to not give up hope."

Seeing the 18 or so people gathered on a snowy corner of Lakeview Park after a big snowstorm hit the area was heart-warming, Bridges said.

"It just reminds me that the people in Sandpoint care and things like this are important to them," she added.

Ray Carter and his wife, Chris, attended the vigil in honor of the four students, but also to honor two of their grandchildren who attend the university. One lives a short distance away and another is a member of the same fraternity.

All said they wanted to pull together, to let the families know the community is there for them.

Wargo, an assistant professor at the University of Idaho, said the idea to hold a community candlelight vigil in conjunction with others in the state came to her in the middle of the night a few days ago. When she got up the next morning, she immediately contacted colleagues.

As the vigil took shape, Wargo shared the information on social media and through local media so the community could gather to honor the four students. The Sandpoint vigil was one of many held as part of a statewide candlelight vigil to remember the University of Idaho students.

As the crowd stood quietly, the flames of their candles gently flickering in the snow, Wargo and her husband, Sandpoint Councilman Jason Welker light four candles — one for each of the students — as they said their names.

"For Ethan Chapman … for Madison Morgan … for Xana Kernodle … for Kaylee Goncalves."

And then, quiet, as those gathered bowed their heads for a moment of silence. 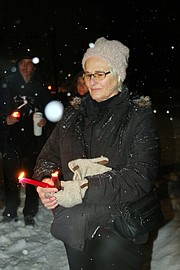 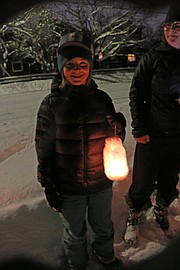 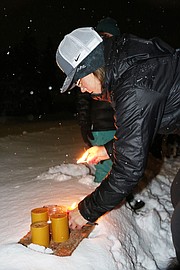