COEUR d’ALENE — Idaho Sens. Chuck Winder and Michelle Stennett agree the in-fighting among the state’s elected leaders needs to end, and both pointed fingers at the far right — and newcomers — for much of the division.

Winder, a Republican and president pro tempore, and Stennett, a Democrat and minority leader, were the guest speakers at an AARP Idaho telephone town hall on Monday.

“There are extreme right wing people here that make a lot of noise,” said Evalyn Adams of Coeur d’Alene, a caller.

Winder said the next general election is important and called on Idahoans to stand up for what is right.

“A lot of the opposition and controversy is coming from people who just moved to our state, so we’ve got to figure out a way to keep Idaho, Idaho,” he said.

Everyone must pay attention to what’s happening, he said.

“Don’t let the far right take control. Vote for people that are reasonable and will listen,” Winder said during the 40-minute program.

“We need to have level-headed, reasonable, thoughtful, civil representation, so when you are out there deciding who should represent you, keep that in mind,” she said.

Winder said a small group of conservatives say Idaho should send the money back to the federal government.

But that’s a lot of money that benefits a lot of people via health, education and environment, he said.

“Some really good things happen with those dollars,” Winder said.

Winder said the reality of it is, those are grants that will benefit local communities in ways they otherwise couldn’t afford.

“That really makes a difference in someone’s lives,” Winder said.

ARPA funds could be “another opportunity to infuse some of those areas that have been lacking,” she said.

One caller asked about being sure all voices are heard, not just the loudest.

Winder said there's an effort on the extreme right — “there are a few in Idaho — certainly not the majority” — who command attention.

“You’re hearing from a very small, vocal minority that gets a lot of press, a lot of air time, financed by dark money from out of state,” he said.

He called this a threat to democracy.

“By far, most people in Idaho are committed to what we would consider items of humanity, individual freedom, protection of rights,” he said.

Stennett said a well-funded, noisier brand of people is getting the attention of media.

“The greater majority feel like they’re not heard and not represented," she said.

Stennett said the majority of Idahoans want and should demand respectful, civil and robust dialogue.

“It takes all of us in our small little ways to make it clear what we will and won’t tolerate,” she said.

On voter identification and election integrity, Winder said the state does not need to make significant changes. But he said there are some little things that could done to improve the process, and bills may be passed to address them.

He said they would likely be more housekeeping than substantive policy changes.

“I could say there’s not any significant fraud in our state,” Winder said.

He said, for instance, a resident can ask for an absentee ballot, and then change their mind and try to get another ballot. The state needs an orderly way to exchange those ballots, Winder said.

He said changes could be made to make people feel more comfortable while casting their vote, “without getting off into the weeds of what happened in Pennsylvania or Georgia.”

Stennett said, “No disrespect to the House, but there is a little bit more bomb-throwing happening in some of the bills coming over from the House as it pertains to, I would call them voter suppression bills,” she said.

She said that in the 2020 general election, Idaho was second to only Vermont when it came to how clean, consistent and nonfraudulent the state's elections were.

"I think the clerks out there ought to be commended,” Stennett said. 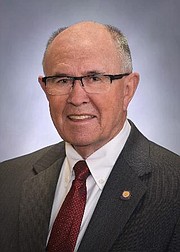