Isabella Waters stands on the podium at the Intermountain Division (IMD) Opener on Dec. 18-19 in West Yellowstone, Montana. She captured second in her U14 age group in the classic race and third in the sprint.
(Courtesy photo)

We’ll be keeping a close eye on the Sandpoint Nordic team throughout the season.

Webb Moffett — Only one local athlete traveled to the USSA races at Alpental-Snoqualmie Pass on Dec. 27-28. U16 racer Crosby Schmidt had a solid weekend finishing fourth and fifth overall in the two giant slalom races at the Webb Moffett Cup, and third and sixth in the two slaloms.

Schmidt also nabbed four podiums for his U16 age group, including two golds. Power failed between the first two slalom runs, so the racers had to hike to the start line to finish the first race, then hike two more times for the second race.

In the second giant slalom of the week, Shiffrin took silver and Moltzan was 13th. The women’s tech team minus Shiffrin, who tested positive for COVID-19, continued on to Lienz, Austria. Moltzan was the only U.S. racer in the points, finishing 22nd.

The men were at the daunting Bormio, Italy downhill, where Travis Ganong led three Americans into the top 20 on the icy and shadowed track. Ganong was eighth, followed by Jared Goldberg in 15th and Ryan Cochran-Siegle in 20th..

Potpourri — We’ll have a report on the remainder of the Lienz races later this week. Any comments, recommendations or contributions to this column may be sent to Shep Snow by email at shep@thesnowschool.com. Negative feedback should be sent to someone else. 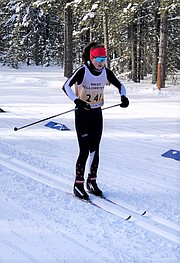